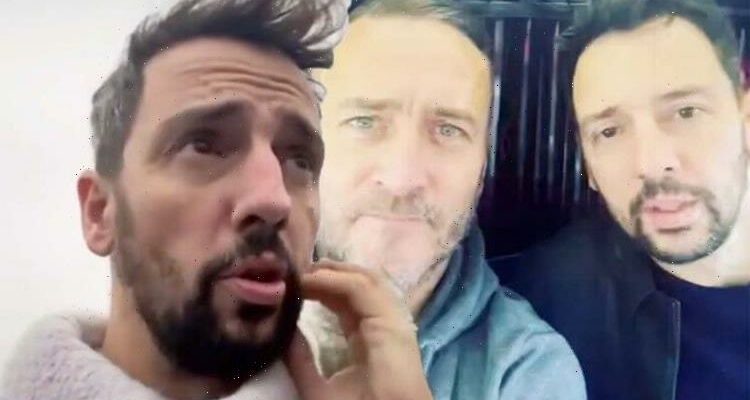 Ralf Little in hysterics as Will Mellor rages at heated seat

Death in Paradise star Ralf Little took to Instagram yesterday to share a video with his co-star Will Mellor as they prepared to embark on a road trip to the north of the country to interview guests for their podcast. The BBC actor, 42, and his co-host, 46, left for their travels in an RV, but Ralf revealed that he planned to sleep his way through the journey leaving Will to make the long drive on his own which he soon took issue with.

In view of his 127,000 followers, Ralf reposted a video shared originally on the The Two Pints Podcast official Instagram account.

He recorded himself as he waited for Will to pick him up and continue their journey towards the North.

Ralf explained: “Sunday afternoon. Standing here at a service station, waiting for the boy Mellor because we’re going up North for the week to interview some podcast guests.

“And he’s told me that we’re travelling in style. I don’t know what that means. We’ll see.”

Panning around to reveal an RV driving towards him, Ralf continued: “Here he is.”

Will’s head could be seen popping out of the vehicle’s window as he waved and shouted.

Laughing at the sudden appearance, Ralf said: “It’s going to be carnage.”

He quipped: “I sort of want to be embarrassed but it’s pretty cool.”

In a separate clip captioned “2 minutes later”, Will took over the camera and started shouting at his co-star after finding him in the back of the vehicle.

Sitting in the driver’s seat, Will said: “So we’re going off around the country – where’s Ralf gone?” he asked.

“Do you think I’m driving? Where is he?” added Will as he stormed around the RV looking for his friend.

The star soon found the Death in Paradise actor happily tucked up in bed.

“Look who’s drawn the short straw, I’m busy driving and he’s in bed!” Will raged as Ralf could be heard telling him to “get on with it”.

However, Ralf was soon made to sit upfront next to Will after finding out that it’s illegal to sleep in the bed of an RV while it’s on the move.

Following the hilarious clip, fans of the pair rushed to the comments section to join in on their jokes.

Ashleighjspencer commented: “Thank you so much for last night’s do! Haven’t laughed so much is ages! Brought back some memories.”

Will and Ralf have been giving fans glimpses into their tour antics on their social media accounts.

The pair first performed together on the sitcom Two Pints of Lager and a Packet of Crisps and went on to create a podcast in 2020.

You can purchase tickets for the Two Pints Live! With Will Mellor & Ralf Little tour here.