A rather flustered Doja Cat took the fastest ‘p***’ ever, as she nearly missed out on her big moment at the Grammys, due to an ill-timed loo break.

Happens to the best of us!

Once their names were read out by Avril Lavigne, SZA – who was on crutches – made it to the stage with a little help from Lady Gaga – but the Say So hitmaker was nowhere to be seen.

As soon as SZA – real name Solána Imani Rowe – locked eyes with Doja, she quipped: ‘You’ve been in the bathroom for five minutes, are you serious?’

Fighting to get her breath back, she replied: ‘Listen… I have never taken such a fast p*** in my whole life.’ 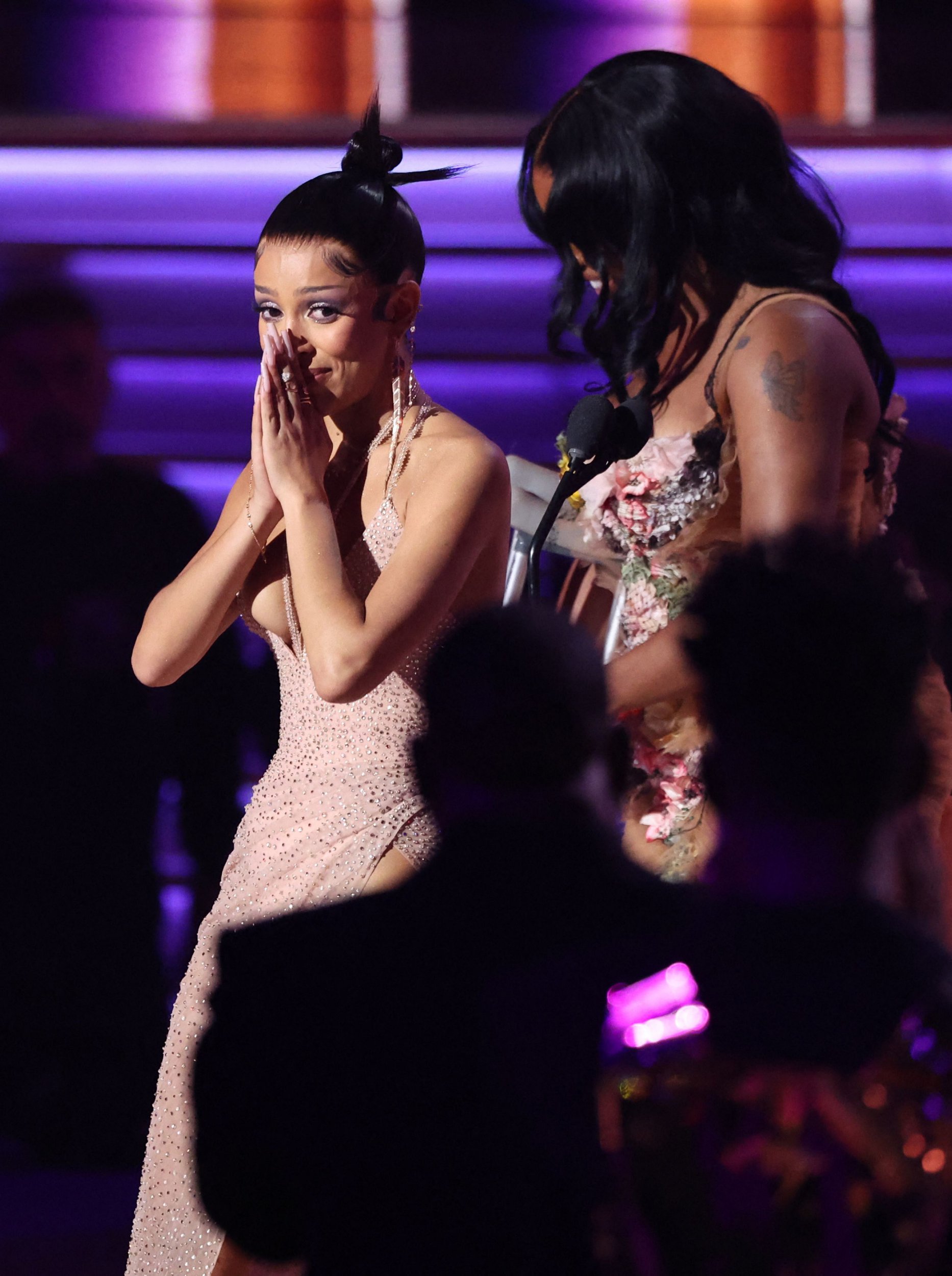 Putting the near-miss behind her, the star couldn’t hold back the tears any longer and described herself as someone who likes to ‘downplay s***’ but hailed her crowning moment a ‘big deal.’

Doja’s relatable moment didn’t go unnoticed on Twitter, as one person wrote: ‘Miss Doja Cat running back from the toilet to accept her Grammy is nothing short of iconic. So deserved.’

‘DojaCat and SZA’s #GRAMMYs speech is performance art. SZA outchea on crutches yet clearly walking just fine acting like that one girl that was always in a knee brace in school and DojaCat running from the bathroom and the fast p*** quote. High quality,’ another added.

The power duo’s banger beat out the likes of Tony Bennett and Lady Gaga’s I Get A Kick Out Of You and Coldplay’s Higher Power.

Elsewhere, comedian Trevor Noah was in charge of presenting duties and used his opening monologue as an opportunity to address the elephant in the room – that being Will Smith slapping Chris Rock at the Oscars.

The in memoriam segment also began with a special tribute to Foo Fighters drummer Taylor Hawkins, who died on March 25 at the age of 50.

As for the awards, Silk Sonic duo Bruno Mars and Anderson Paak were victorious, winning in all four of the categories they were nominated in, including song of the year and record of the year for Leave The Door Open.

Album of the year

Jon Batiste – We Are

Record of the year

Song of the year

Foo Fighters – Waiting on a War

HER – Fight for You

Tyler, the Creator – Call Me If You Get Lost

Chris Stapleton – You Should Probably Leave

Cedric Burnside – I Be Trying

Soja – Beauty in the Silence

CeCe Winans – Believe for It

CeCe Winans – Believe for It

Producer of the year, non-classical

Don Cheadle – Carry On: Reflections for a New Generation From John Lewis

Bo Burnham – All Eyes on Me