Yuh-Jung Youn, 73, won the award for Best Supporting Actress for her role as unconventional grandmother Soonja in Minari. Accepting her gong, she admitted she thought British people were “snobbish”. When the camera came back to host Dermot O’Leary, 47, he appeared to be left speechless by her remark.

She said: “I don’t know what to say, I feel very honoured to be nominated.

“I would like to express my deep condolences for your Duke of Edinburgh.

“Thank you so much for this award, every award is meaningful but especially this one, recognised by British people, known as very snobbish people, they approve me as a good actor,” she added.

Following her remarks, Dermot pulled a puzzled face and said: “I don’t know how we react to that… thanks.” 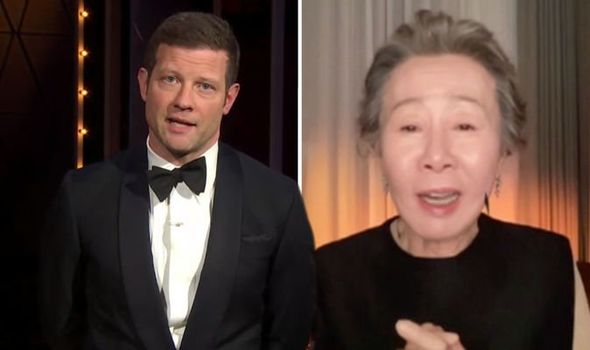 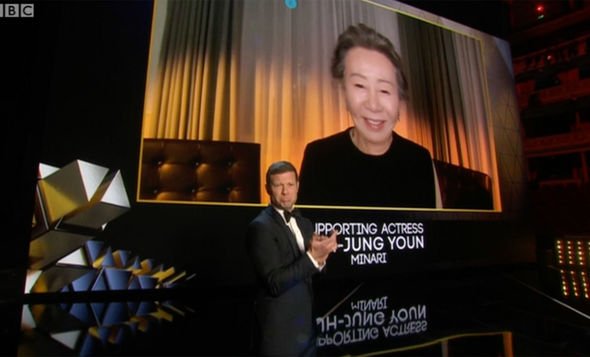 Addressing her comments with the press, she said she didn’t mean it in a “bad way”.

Yuh-Jung said her opinion was from a “personal experience” when she visited Cambridge.

She explained: “I think somehow, I visited Britain, I had some kind of fellowship in Cambridge, 10 years ago as an actor.

“Somehow it felt very snobbish, but not [in] a bad way. You have your long history and then you have your pride. 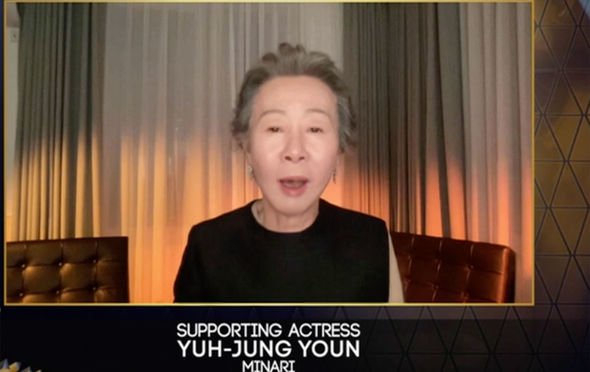 “Being an Asian woman, the people are snobbish, that’s my honest opinion.”

On why she took on the role in the film, she said the script “touched her”.

Earlier this month, she made history by becoming the first Asian winner at the SAG Awards for the same gong.

She said of her win: “I don’t know how to describe my feelings.

“I’m being recognised by Westerners,” as she went on to thank her acting peers. “I’m very pleased and happy.”

The 74th ceremony kicked off in London this evening with social distancing measures in place.

Midway through the ceremony, tributes were made to the famous people who had died in the past year.

Hosts Dermot and Edith Bowman made a special tribute to the late royal Prince Philip. who died at his Windsor Castle residence aged 99 on Friday.