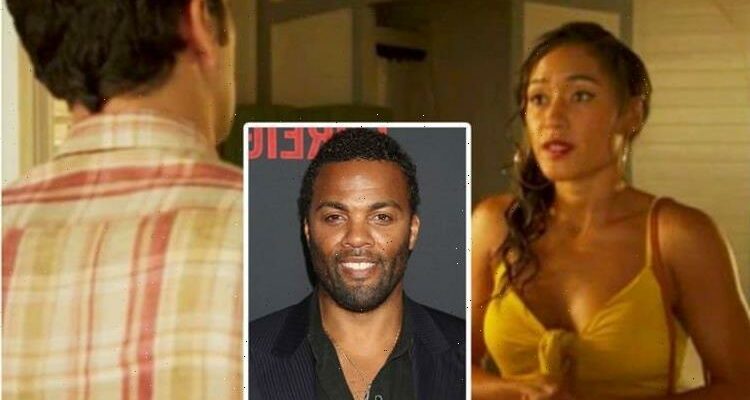 Death In Paradise’s male and female lead characters Ralf Little, 41, and Josephine Jobert, 36, will be reprising their roles for the upcoming shows, but could we also be seeing a familiar face returning? Express.co.k caught up with actor Ray Fearon to discuss his career and involvement in filmmaker Isaac Julien’s ‘Lessons of the Hour’ for The Piccadilly Art Takeover.

The 48-year-old actor said he’d be up for returning to Death In Paradise if he was asked.

Ray played Curtis back in 2011 as part of a Music of Murder episode.

“So, if I was available and they asked me to do another one then most probably I would.”

Plot plans around the upcoming shows are currently under wraps, however Josephine recently answered fans’ questions about a potential romance storyline.

The last series finished with DI Neville Parker (played by Ralf) just about to confess his feelings for Josephine’s character DS Florence Cassell.

Following the cliffhanger, fans swiftly called for producers to release new episodes earlier than planned as they eagerly wait to see if they’ll be more than friends.

Viewers were so invested in the moment that a petition titled, ‘Lobby BBC to air series 11 of Death in Paradise earlier to resolve ‘Florville’ dalliance’ was set up online.

Part of the petition reads: “The request to Piers Wenger, head of the BBC Drama Commissioning department, is: Please liaise with Red Planet Productions and negotiate for the airing of Death in Paradise series 11 be brought forward to a date earlier than January 2022.

“So that the British and International fans of Death in Paradise can all find some heartwarming joy, to pleasantly distract us from the present sad state of the world, in seeing the joyous development of DI Parker’s and DS Cassell’s forthcoming relationship.”

Josephine has since taken to her Instagram page to respond to fans’ queries about the drama.

On her Story, she shared a message from a fan which read: “Oooh maybe for a special WEDDING episode? FLOVILLE?!!(sic)

“Or is that too soon? Can you tell I’m rooting for those two to get together?!”

The actress replied: “Ahaha I love your imagination and enthusiasm.

“But, without spoiling anything, maybe a wedding would be a bit rushed, don’t you think?”

Ralf has also said he doesn’t know if Neville has what it takes to go through with telling Florence how he really feels.

Elsewhere, Ray will appear on the Piccadilly Lights in ‘Lessons of the Hour’, a poetic meditation on the life and times of abolitionist Frederick Douglass.

The event is a unique partnership between the Royal Academy of Arts and Art of London, supported by Sky Arts, Piccadilly Lights, Westminster City Council and the Mayor of London.

From 21st July – 31 August 2021, the area around Piccadilly will be transformed with 30 hanging flags and 13 pedestrian crossings – the most art crossings in one place ever in the UK.

Visit www.artoflondon.co.uk for more information on The Piccadilly Arts Takeover and their season of free public art.