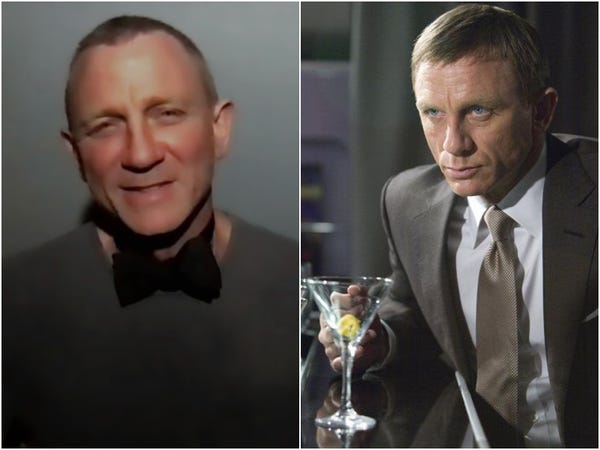 Daniel Craig said he celebrated landing the role of James Bond by getting drunk on his first-ever martinis.

Craig spoke to Jimmy Fallon on "The Tonight Show" Monday and told the chat show host he received the life-changing call from Bond producer Barbara Broccoli while shooting a film with Nicole Kidman in Baltimore.

Craig said Broccoli told him simply: "Over to you, kiddo."

The five-time Bond actor told Fallon he was instructed not to tell anybody, but had a night off and so decided to celebrate the big news by himself.

"I was in Whole Foods supermarket, literally with a shopping cart with deodarant and washing liquid — I was doing my weekly shopping," Craig said.

Craig continued: "I pushed that [cart] down an aisle and walked into the liquor section. I bought myself a bottle of vodka, a bottle of vermouth, and a shaker and a glass."

The "Knives Out" star, whose last Bond appearance will be in the delayed "No Time to Die," explained to Fallon that he had never drunk a martini before, let alone mixed one. But he said that he decided to give it a go, even though a martini is "just a glass of vodka, let's be honest."

"I did half a bottle, and stumbled over to a bar in Baltimore … If you put a gun against my head, I couldn't find the bar again, I was so drunk when I got there," Craig said.

Craig said he must have had another three martinis at that bar, and remembered that he must have been smiling "from ear to ear" as the bartender kept asking him "what's going on, you're in a good mood?"

Craig told Fallon: "I said: 'You wouldn't f—ing believe me if I told you.' I must've looked crazy."

Craig's first Bond movie was "Casino Royale" in 2006, and has gone on to star in four more 007 films since. His fifth, and final one, will be "No Time to Die," which was first scheduled to be released in April 2020 but was pushed back until November 25, 2020, in the US. That date has been pushed back again due to the continued impact of the coronavirus on the movie theater industry, with a new release of April 2 now in place.

Watch Craig's interview on "The Tonight Show" below: