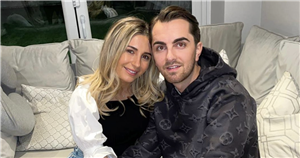 Dani Dyer has revealed she is jetting off on holiday with son Santiago as she breaks her silence after boyfriend Sammy Kimmence was jailed for more than three years.

The 24 year old has ignored her boyfriend's sentencing – which came after he scammed two elderly men out of £34,000 by posing as a financial investor – and instead focused on her trip away with their six month old son.

Love Island winner Dani took to Instagram on Wednesday morning to show off her and Santiago's matching beach bags with her 3.4million followers.

She wrote atop the video: "Holiday packing and Santis stuff takes up most of the room already [laughing emoji].

"I over pack as it is but with a baby OMG!," she continued as she prepared to jet off to the undisclosed location.

The doting mum then went on to share an adorable video of Santiago giggling as he sat on a play mat and looked into a mirror.

It is reported that Dani even booked Sammy a ticket for the holiday as she thought he would be "let off" for the crime. A source told MailOnline: "Dani was convinced he would be let off.

"She had booked the holiday for herself, Sammy and their son Santi, but now she's having to go without him."

Sammy, 25, was sentenced to 42 months imprisonment on Wednesday at Portsmouth Crown Court, where the court heard how his actions left an RAF veteran "living on the breadline", reports the Mirror.

The court heard how Sammy's victims were legitimate clients of an investment company where he used to work, with him taking them on when the business stopped operating.

It was then that he falsely claimed to Peter Martin, 90, and Peter Haynes, 80, that he was authorised to provide financial services through his company S&S Trading Ltd, taking £33,919.

Kimmence pleaded guilty to five counts of fraud back in April, where the judge warned him that his offences were serious enough to cross the custody threshold and land him a prison sentence.

Four of those counts against Martin, 91, racked up to nearly £26,000. Martin has since passed away.

The fifth count totalled £7,927 against Peter Haynes, who has Alzheimer’s.

Mr Haynes said of the matter: "In one go, all the savings that I accrued over my working life were wiped out. My bank account shows zero."

For the latest on Dani and other Love Island stars, make sure you're signed up to OK!'s daily newsletter.