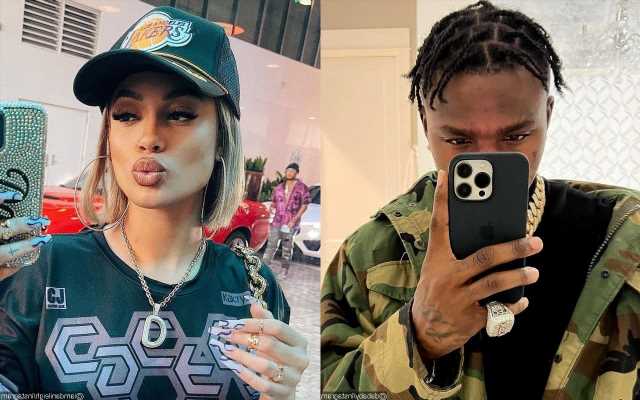 After the ‘ROCKSTAR’ hitmaker shares a cute video of him twinning with his baby girl, one Instagram user accuses him of competing for the ‘best parent award’ with his baby mama.

AceShowbiz –DaBaby continued to catch heat with his social media posts. After the “Suge” rapper shared a cute video of him twinning with his baby, some online users accused him of trying to save his reputation following an altercation with his baby mama, DaniLeigh.

The 29-year-old emcee, born Jonathan Lyndale Kirk, shared the said video on his Instagram Story on Wednesday, December 8. In the footage, which soundtracked by Coi Leray‘s “TWINNEM”, the father and daughter duo were seen donning matching orange hoodies.

While many people gushed over the adorable video, some others put DaBaby on blast. One person in particular argued, “Him and Dani competing at this point for best parent award..” A different user sighed, “He’s trying to hard now.”

The criticism continued with another individual writing, “Him and Dani posting that baby more than usual is giving very much damage control && I feel bad for the baby. Keep her off social media.” Someone else chimed in, “So cause he post videos and pictures that make him a good dad.”

This arrived a few weeks after DaBaby shared an Instagram video of him holding his baby girl’s hands while dancing to Nelly‘s “Hot in Here”. In the caption, DaBaby wrote, “Imagine thinking it’s sweet enough to play w/ my kids then boom…. I whip out & burn yo a** n front of everybody & walk away w/ the str8 face. Let this fame s**t fool you into thinking I’m not living & dying for ALL mines.”

“Aint s**t changed, The FIRST one of y’all I catch playing in person I’m doin you dat. So y’all n***as be safe,” the hip-hop star continued. “Daddy love you baby. Can’t wait to put ya boyfriend on a T-Shirt.”

Unsurprisingly, DaBaby drew backlash for failing to support the infant’s neck. “This can go south really bad. The baby’s neck is not strong enough for all of that,” one person argued, while another person urged him, “Hold her head and shut up.” A third then echoed the sentiment, “He need to hold that poor baby neck.”