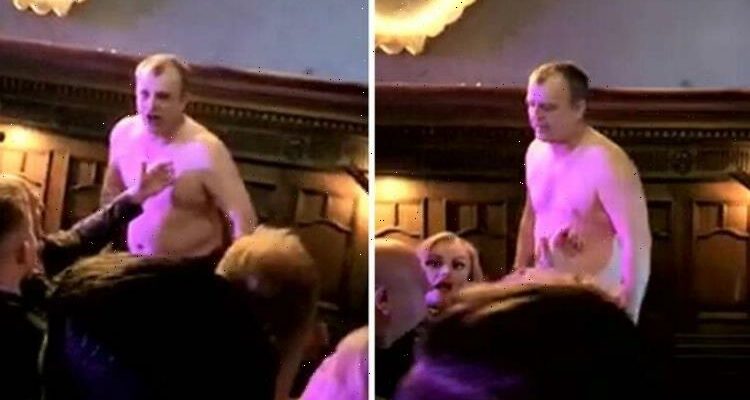 Simon Gregson, 47, was ejected from a nightclub after half-stripping and screaming obscenities at a bouncer, according to reports. The soap actor was attending a co-star’s leaving do at the weekend when he was asked to leave the club.

Simon was seen raging at bouncers as he was being escorted out.

An anonymous witness said that despite being “the life of the party”, Simon “took it a bit far”.

The witness explained: “He was the life and soul of the party.

“But he took it a bit far and it annoyed the bar staff and bouncers in the end.”

Express.co.uk has contacted a representative for Simon for comment.

The actor portrays Steve McDonald in the ITV soap opera.

He was also a runner-up in last year’s I’m A Celebrity… Get Me Out of Here!.

The Corrie star was out for co-star Alexandra Mardell’s leaving bash.

The Sun on Sunday’s video appears to show Simon appearing topless and getting into spats with bouncers.

The bouncers could subsequently be seen trying to pull the star down as he was dancing on a piece of furniture.

The soap star could be seen rowing with security at the venue.

Some crowd members could be heard shouting abuse, as a bouncer grabbed his arm and demanded that he step down.

The incident occurred at the Albert Schloss bar in Manchester’s Deansgate.

Simon appears to say “f*** you” to the two members of staff as they try to calm him down.

Before leaving the stage, he says “I will get down.”

Simon has been a regular on Corrie since 1989, and co-star Alexandra portrayed his on-screen daughter, Emma Booker.

Simon could be seen earlier in the night hugging Alexandra, 28, as she stood alongside her boyfriend Joe Parker.

An anonymous source told the publication that Simon was “acting wildly” and getting carried away.

They added that the staff “failed to see the funny side” and this annoyed Simon.

They commented: “Simon was acting pretty wildly — but more in the sense that he was in high spirits and getting carried away.

“He had obviously had a good night and was out with a lot of the Corrie cast and crew.

“It was all a bit of a laugh but it’s quite a plush venue and having a topless middle-aged bloke with a pot belly dancing around on stage at the end of the night is not the sort of image they want to project.

“They didn’t seem to care that he was a celebrity and Simon looked pretty angry to be stopped in his tracks by bouncers.

“He thought the staff had failed to see the funny side and seemed to argue with them.”