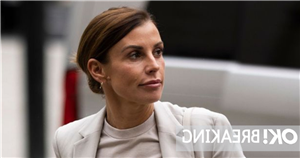 Coleen Rooney has released a statement following the verdict given out by Mrs Justice Steyn on the Wagatha Christie libel trial on Friday 29 July.

Rebekah Vardy, 40, launched legal action after Coleen, 36, claimed her fellow WAG's Instagram account was linked to stories about her leaking to the press.

The seven day-long trial took place back in May and after a wait of over eight weeks, Mrs Justice Karen Steyn has now delivered her verdict – announcing that Rebekah has lost.

Following the news, Coleen has broken her silence as she's shared how "pleased" she was that the ruling went in her favour.

However, she “never believed” the case should have gone to court “at such expense in times of hardship for so many people when the money could have been far better spent helping others".

She continued: “Both before and after my social media posts in October 2019, I made every effort to avoid the need for such a drawn out and public court case. All my attempts to do so were knocked back by Mrs (Rebekah) Vardy.

“This left me with no alternative but to go through with the case to defend myself and to end the repeated leaking of my private information to The Sun.

“These leaks from my private Instagram account began in 2017. They continued for almost two years, intruding on my privacy and that of my family. Although I bear Mrs Vardy no ill-will, today’s judgment makes clear that I was right in what I said in my posts of October 2019."

She added: "Finally, I would like to thank all of my legal team, my family, friends and everyone who supported me, including the public, through this difficult and stressful time.”

Rebekah and Coleen had previously attempted to settle outside of court, but were unable to reach a conclusion.

The seven-day trial, which was held Royal Courts of Justice, delivered plenty of dramatic moments and saw Rebekah leave the court twice in tears.

The court heard Rebekah admit her agent could have leaked the stories and how the leaks "messed" with Coleen's head.

During the trial in May, the court saw Coleen's husband Wayne take the stand to speak out on how the ordeal had impacted his wife.

"I certainly don’t, I don’t think my wife wants to be in that situation.

He continued: “I have watched my wife over the last two and a half years really struggle with what’s going on. She has become a different mother, a different wife."

“It’s been traumatic for my wife throughout the situation and hopefully whatever the judgement is in this case myself, my wife and our children can go on and live our lives because it’s not something we want to be part of.