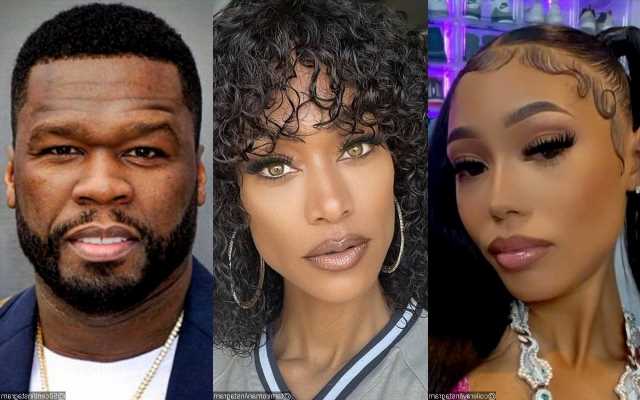 The ‘Trendsetter’ artist and the ‘Basketball Wives’ star are exchanging words online after the latter weighs in on the drama involving Coi, her father Benzino and 50 Cent, who has been beefing with Benzino for over a week.

AceShowbiz –Coi Leray is clapping back at Tami Roman. The “TWINNEM” hitmaker and the reality TV star exchange words online after the latter gets herself involved in the drama surrounding Coi, her father Benzino and 50 Cent.

It started after Tami shared her two cents on Benzino’s fiery tweets directed to Fiddy on Sunday, April 24. The “Love & Hip Hop: Atlanta” alum threatened to sue the “In Da Club” hitmaker after he declared he will put Coi on TV if people keep hating on her. Of the drama, Tami said in a comment under The Shade Room’s post, “This is going to be a mess because 50 ain’t wrapped too tight.”

An Instagram user then replied, “yea it’s funny until he comes for one of your daughters.” To that, Tami wrote back, “my daughters don’t give anybody a reason to come for them, they be off to the side minding their business.”

Tami’s comments didn’t go unnoticed by Coi who seemingly took them as a personal attack. Putting the “Basketball Wives” star on a blast, the “Trendsetter” artist suggested her to let adults be adults and kids be kids. “You should do what they do and mind your business and stand to the side women. Lead by example for dem kids,” so she said.

Tami defended herself, noting that she wasn’t talking about Coi. “Oh Lord pumpkin @coileray immaturity is displayed when you can’t even recognize when someone is on your side,” she wrote. “I commented on your dad coming at 50 who is supporting you (they are both adults btw) And for clarity everyone comments in the shade room why do I have to be quiet when you don’t.”

Not backing off, Coi stood up for herself once again. “She saying ‘my daughters mind there business’ as if I asked for any of this s**t!” she began her lengthy comment. “As if im not out here doing the same thing.. tryna put me down to big her ‘perfect family’ up. Idc . I’m done giving this s**t attention. And him. He don’t get how much damage he been doing but it ain’t my job to make him or anybody else realize .. anyways go stream my album . I’m done.”

While Benzino and Coi have been beefing for quite some time, the former and 50 Cent started feuding after the latter accused Benzino of being gay in a homophobic remark. On April 13, the Queens native wrote alongside a clip in which Benzino talked about his sexual preferences, “Young Buck, Benzino just embrace who you are but don’t pat nobody butt when they score a basket. fool. Hahaha, Nah. FOR REAL! PUNK.”