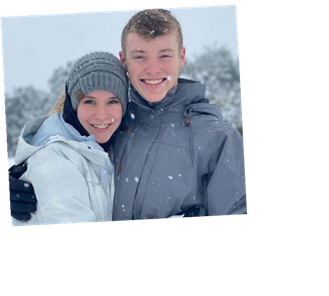 They have not yet slept together.

Heck, they have not yet even kissed, per the very conservative and fairly insane rules handed down by Justin’s famous and polarizing parents.

Are they at least living together, however?

Getting to know each other as roommates because one day soon they’ll be sharing a roof as husband and wife?

This question was raised last week on social media after a photo of Claire and Justin hanging out in a snowstorm went viral.

“Fun! Did Justin move to Texas to be closer to Claire?” one curious Counting On fan asked via Instagram, to which Hilary Spivey, Claire’s mom, replied:

“No, he just happened to be here for the snow! We were grateful!”

So it doesn’t sound as if Claire and Justin are even living in the same state right now.

The 19 Kids and Counting alum is only 18 years old.

He proposed to Spivey — who is only 19 years old — on his birthday in November.

Based on something Claire’s mother said previously, the teenagers will get married at some point in 2021.

Many critics assume this is an arranged marriage.

Claire and Justin’s families have known each other for years; the youngsters barely courted for any period of time prior to their engagement; and THEY ARE JUST SO GOSH DARN YOUNG.

“There is nothing comparable to finding the one you are meant to spend your life with,” the paid told Us Weekly on Monday, November 16.

“We know we have found that in each other. We cannot wait to be married and are looking forward to a life together of faith in Christ, love for one another and happiness!”

On this same day, Spivey gushed over the TLC personality, who is the 14th youngest of Jim Bob and Michelle’s numerous kids.

“After 14 months of courting, I am thrilled beyond words to be engaged to @justinsamduggar!!!” she wrote on Instagram, adding:

“So looking forward to see what the Lord holds for us during this next chapter of life.

“Thank you everyone for your support and enthusiasm!

Justin and Claire met at a family conference in the spring of 2019.

The former then asked the latter’s dad for permission to court his daughter.

One thing then led to another, both sets of parents very clearly got involved… and here we are now.

Probably like a year and a half from Spivey and Duggar welcoming their first child.

“Something I really admire in Justin is how serious-minded he is, but his ability to have fun and to just see the bright side of things no matter what.

“He always looks for the best in people and I want to be more like him every day.”

Sounds totally legitimate and not at all scripted, you know?

For his, far worse written part, Justin has said Claire came into his life “when he wasn’t really expecting it” and that he “just knew that she was the one.”

Because his fiancée has “a lot of good qualities” and “there are so many good things that I see in her. I’m so blessed to have her in my life.”

This is true love!