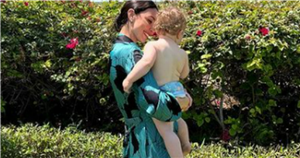 Christine Lampard delighted fans as she shared a rare snap with her baby son Freddie.

The television presenter is currently on holiday with her husband Frank Lampard and shared a stylish snap of herself cradling the adorable one year old.

The 41 year old, who is usually private when it comes to her family life, looked sensational as she wore a black and blue printed maxi dress from her clothing collection with retailer Wallis.

Christine's brunette locks were styled in a chic bun, and she opted for maximum comfort with a pair of flip flops as she soaked up the sunshine. Christine's followers gushed over the snap, with one person writing: "Beautiful lady, beautiful dress and scenery!"

Another wrote: "So beautiful Christine! Have a fabulous holiday", while a third added: "So magnificent and stunning."

Frank and Christine have been married since 2015 and share two children together – Patricia, three, and son Freddie.

Christine is also stepmother to Frank's two daughters, Isla, 14, and Luna, 16, from his previous relationship with Spanish model, Elen Rivas.

Christine, who often presents ITV's Loose Women, and former Chelsea football ace Frank married in a lavish ceremony in 2015 at St Paul's Church in Knightsbridge, after being together for six years and engaged for four.

The couple met when they attended the Mirror's Pride of Britain Awards in 2009, but Christine described it as an "awkward introduction".

Speaking on Loose Women, Christine spoke of the fateful meeting saying: "Frank came over to me and said, 'I watch you on The One Show'".

She replied: "No, you don't! Who was my guest last night?' And he was able to tell me!"

"There was an awkward introduction at the party afterwards," she added.

She revealed that after he got her number, he called her after the awards with a withheld number. She picked up the phone and "it was him".

"I said 'Wow, you're keen!' as a bit of a joke, and we chatted, and he said he enjoyed meeting me and would like to stay in touch."

The family currently reside in Liverpool in the wake of Frank bagging a job as the manager of Everton Football Club.

Speaking about his new job, a source told OK!: "The deal Frank has signed has been going on for some time – and it's perfect for him. So it's great news that it's been finalised. He was really gutted about Chelsea, so this is great."

They described Christine as being "thrilled" by the news, despite the fact it was taking the family away from London.

"Christine is really thrilled about it because it makes Frank happy," our insider said.

For all the latest showbiz stories, sign up for OK! 's daily newsletter here.