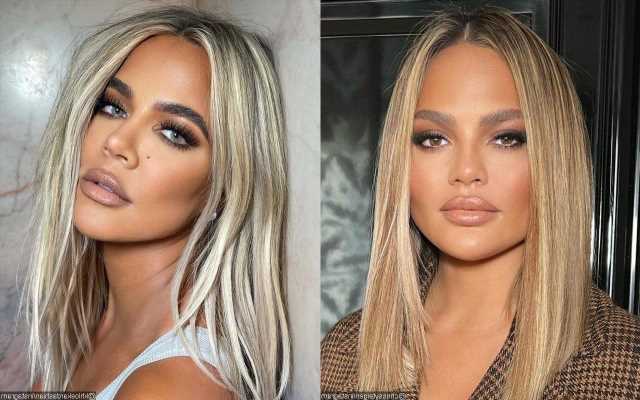 While the model wife of John Legend looks stunning, fans can’t help but notice her uncanny resemblance to the former ‘Keeping Up with the Kardashians’ star.

AceShowbiz -Chrissy, is that you? Fans apparently were having a hard time telling apart between Chrissy Teigen and Khloe Kardashian. The model was even mistaken for the reality TV star after posting a new glam photo on her Instagram account.

While Chrissy was stunning, fans couldn’t help but notice her uncanny resemblance to Khloe. “Looked like khloe kardashian when I looked quickly,” one person wrote. Meanwhile, another echoed, “Whoa! I thought this was khloe!”

“Anyone else thought she was khloe at first glance?” another user asked. The comment earned thousands of “likes” from people who agreed to the sentiment.

That aside, Chrissy revealed back in November that she underwent eyebrow transplant surgery. In one of the clips she posted on Instagram Stories, she showed her look before the procedure while explaining why she chose to undergo the procedure. “I never wear makeup if I can avoid it so I was so excited for this eyebrow transplant surgery where they take hairs from the back of your head!” she captioned the image featuring her wearing a white outfit, seemingly ready for the surgery.

She then revealed the result of the eyebrow transplant in the next post. This is right after surgery!! Crazy!!” the former “Lip Sync Battle” co-host shared in excitement. “A little dark from the pencil but it’s so cool to have brows again! Teens: do not pluck them all off like I did!!”

Her post, however, earned her criticism from Internet users who called her out for being “so out of touch with reality it’s literally disgusting.” One critic wrote, “The things I see you post are non relevant. I always tell my 11 yr old not to look up to people like you or your type. You’re seriously cancer. BTW, this is totally in response to the eyebrows post.”

Chrissy clapped back at the haters, writing, “WHY are people so f**king riled up over any little thing I do?” She went on cautioning her haters, “You’re gonna give yourselves a heart attack.”