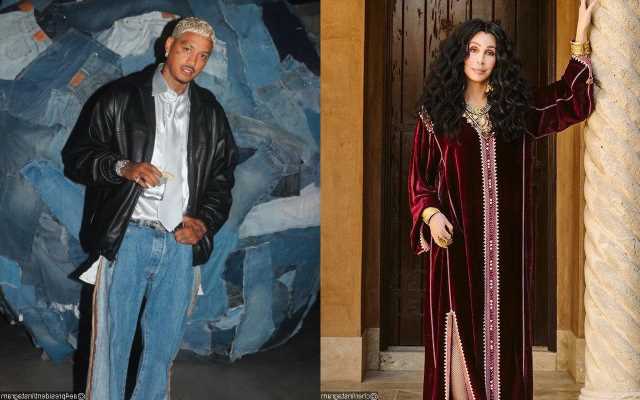 News broke of Cher and AE’s alleged romance after Deuxmoi reported that the singing legend and the music executive at Universal Music Group were hanging out with Tyga and Evan Ross in October.

AceShowbiz –Cher is no longer hiding her romance with Alexander Edwards a.k.a. AE. Just a few weeks after sparking romance rumors with Amber Rose‘s ex, the “If I Could Turn Back Time” songstress professed love to him.

On Sunday, November 6, the 76-year-old shared a photo of her beau on her Twitter account. In the accompanying message, she simply gushed, “Alexander,” adding one red heart emoji.

A fan then questioned AE’s intention. The individual commented, “I’m not sure how I feel about this. I’ve been a fan for so long that I’m immediately suspicious of his intentions towards you. WE know you are fabulous and I’m sure your inner circle will continue to have your back. Want you to be happy, but not taken advantage of!!!”

The tweet did not go unnoticed by Cher, who replied, “As we All Know …I WASNT BORN YESTERDAY,& What I Know For Sure…There Are No Guarantees.” She then explained, “Anytime you make a Choice You Take a Chance.I’ve Always Taken Chances…It’s WHO I Am.”

News broke of Cher and AE’s alleged romance after Deuxmoi reported that the singing legend and the music executive at Universal Music Group were hanging out with other musicians, Tyga and Evan Ross on October 26. A source additionally told the outlet that the duo was “making out” that night, while he was also “sucking on her fingers.”

“Wednesday night at chateau marmont – CHER sitting at a table with tyga and Evan Ross. Also at the table was AE (amber rose baby daddy) and he and Cher were making out and he was sucking on her fingers,” read the piece of information posted on Deuxmoi’s Twitter page. “A little too bizarre,” added the tipster, who asked to remain anonymous.

Days later, Cher and AE were seen holding hands when entering celebrity hotspot Craig’s in West Hollywood. In one of the pictures surfacing online, the 36-year-old was seen kissing his girlfriend’s hand in their car.