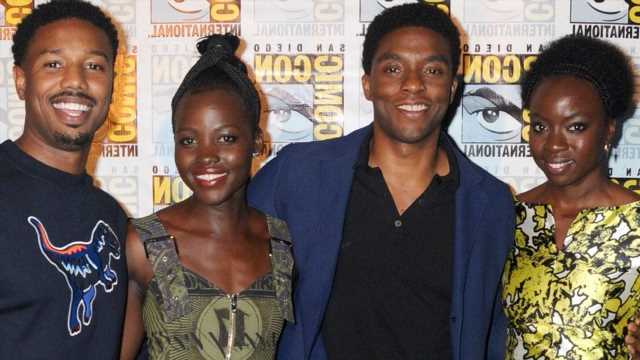 One year after his untimely death, the actor is being honored and remembered by his friends and former co-stars. Boseman died at the age of 43 after a secret four-year battle with colon cancer. The Black Panther starnever publicly shared his diagnosis, only revealing his illness upon his death on Aug. 28, 2020.

On Saturday, marking the one-year anniversary of his death, Lupita Nyong’o, Viola Davis and many more took to social media to pay their respects to their dear friend.

“I did not know that I could miss both his laughter and his silence in equal measure. I do. I do… One year after his passing, the memory of @chadwickboseman remains this alive in me,” the actress wrote alongside a candid photo of the two laughing.

Josh Gad also shared the last text that he received from Boseman, and how he often goes “back to this, my final text from him, and smile knowing he always sought the beauty even when it could have been so much easier to give in to the harsh realities of life.”

“He was an angel on this planet and is now a Saint on high. Love you and miss you more than ever… forever. #ChadwickBoseman,” he added in part.

Mark Ruffalo also posted a black-and-white photo of the actor, captioning the shot, “Can’t believe how fast time has gone. Thinking of you today, @ChadwickBoseman.”

Most recently, his wife, Taylor Simone Ledward,paid tribute to him at the Stand Up to Cancer event by performing a beautiful rendition of “I’ll Be Seeing You.”

Since his death, Boseman’s work and final films received a slew of recognitions. For his performance of Levee in Ma Rainey’s Black Bottom, he earned an Academy Award nomination and won the NAACP Image Award, Critics’ Choice, Screen Actors Guild Awards and BET Award, among others.

For more on Boseman’s life and legacy, see below.