Watch out, Joey Chestnut! Camille Kostek and Rob Gronkowski seek to get back in the game in this EXCLUSIVE preview of ‘Celebrity Game Face’ by fitting 9 hot dogs in his mouth at the same time!

Kevin stresses that Rob does not have to eat the hot dogs. He just has to fit 9 of them in his mouth. “This is not cool. You’re going t be shoving weiners in my mouth,” Rob says to Camille.

Camille approaches this challenge with fierceness. She doesn’t waste any time trying to stuff multiple wieners in Gronks mouth. “You got it, baby,” she tells Rob. She encourages him by telling him that she’s so proud of him.

It’s no surprise that Camille and Rob are victorious. She does in fact fit all 9 hot dogs in his mouth. Rob is a good sport about it all. “I love weiners, Kevin,” the Buccaneers player jokes.

Celebrity Game Face is a reality series that follows celebrity contestants as they go head-to-head with the hopes of winning the “Hart of Champion” trophy and being awarded money for their charity of choice. Each team will compete in at-home games such as “Pardon My Pecker” where teammates must pop the most balloons with a chicken beak, “Cookie Face” where players place a cookie on their forehead and twist their face to the cookie in their mouth, and “Blow Hard” where players blow out massive candles wearing a mouth stretcher. 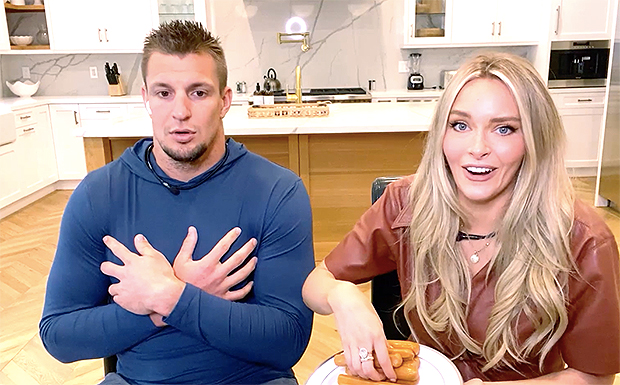