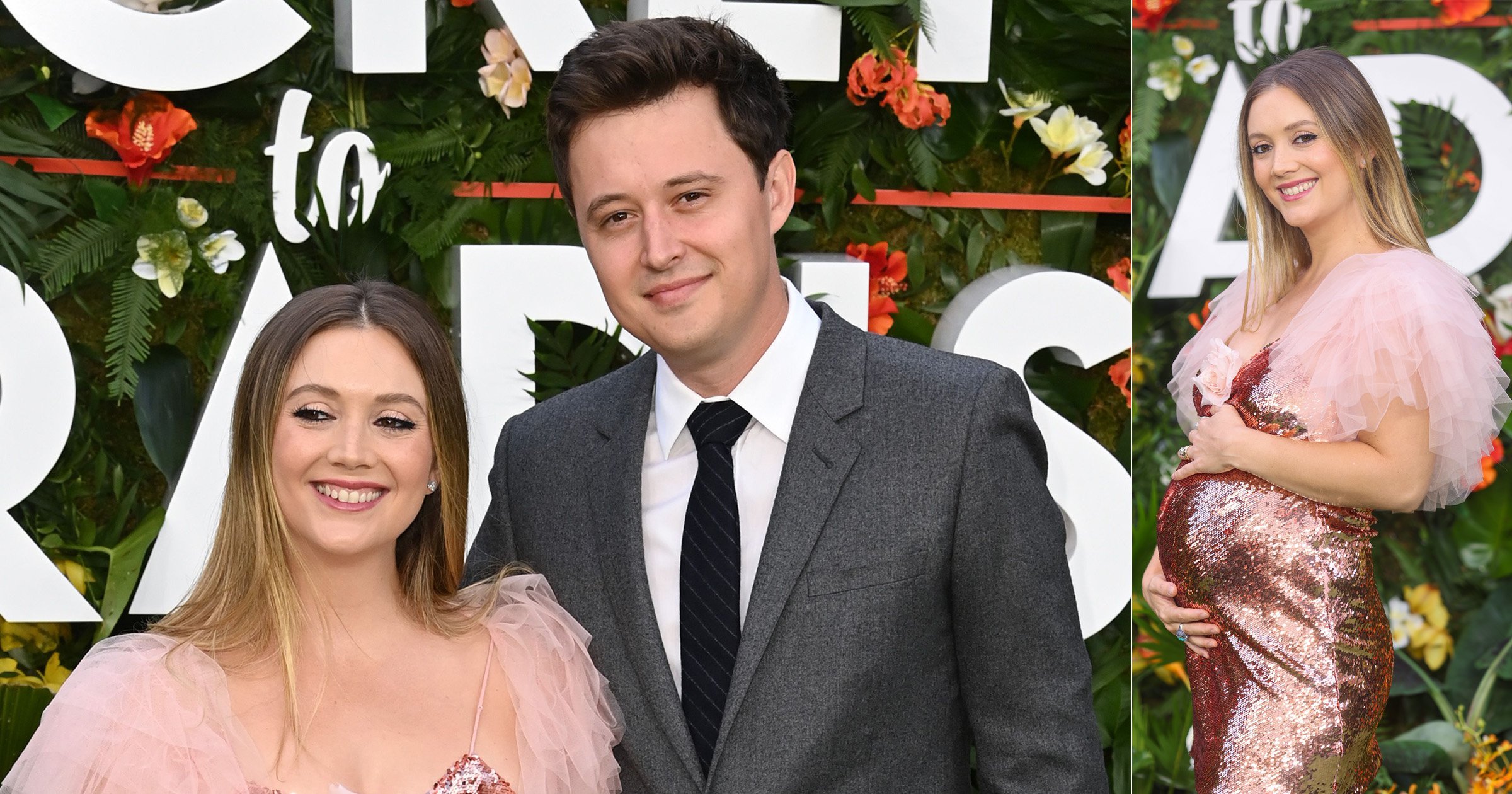 The Scream Queens star, 30, who is the daughter of the late Carrie Fisher and Bryan Lourd, radiated pure joy as she cradled her growing baby bump at the Ticket To Paradise London premiere.

Billie stunned the red carpet in a rose gold sequined midi dress, while her husband looked dapper in a grey suit.

Billie’s stepdad Bruce Bozzi was one of the first to congratulate the milestone via Instagram Stories.

Uploading a picture of his stepdaughter at the event, he wrote: ‘Premiere Night in London.

The Booksmart actress welcomed her first child in September 2020.

Billie stunned fans and friends when she posted a picture of her baby boy’s tiny feet sticking out of the bottom of a blue and white blanket, and wrote: ‘Introducing: 💙👑💙Kingston Fisher Lourd Rydell💙👑💙.’

Lily Collins, Matt Bomer, Billy Eichner, Matthew Morrison and Kaitlyn Dever were among her other famous friends and colleagues who left congratulatory messages on the post.

Billie and Austen paid tribute to the actress’s late mum Carrie by also giving her the surname Fisher; while Billie goes by the surname of her father Bryan Lourd.

Addressing how Austen supported her during the pregnancy, Billie said: ‘He was so caring and incredible and cooked for me and gave me foot massages,’ and that he attended positive birthing classes with her.

‘He was with me every step of the way. And we just became even closer friends, even better partners. I think it prepared us to be the best parents.’

In March, Billie and Austen got married in Mexico according to the actresses American Horror Story co-star, Leslie Grossman, 50.

Speaking about the joyous event at the time, she wrote via Instagram Stories : ‘Billie and Austen’s wedding weekend is over, which is so sad ’cause it was the most fun.

‘But I won best dressed, and I may have bribed the judges. I may have done whatever I needed to do to get this trophy. But I got it.’

Billie and Austen first announced their engagement on social media in June 2020, sharing a series of loved-up photos together.

Austen wrote at the time: ‘She said YES!! (Actually she said “Duhhh”) But I guess that’s even better than yes?!?’

Also attending the star-studded premiere was Hollywood royalty George Clooney and Julia Roberts, as they promoted their upcoming romantic comedy.

The film reunites the two icons who appeared together in the Ocean’s Eleven trilogy.

The official synopsis reads: ‘Academy Award® winners George Clooney and Julia Roberts reunite on the big screen as exes who find themselves on a shared mission to stop their lovestruck daughter from making the same mistake they once made’.