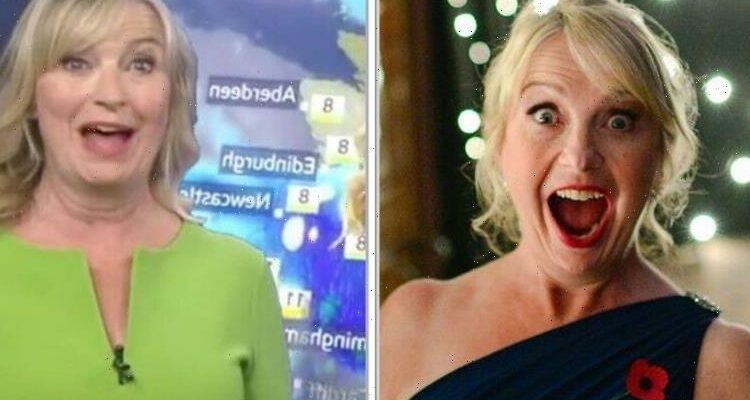 Carol Kirkwood, 59, has sent her apologies to a BBC colleague in a tweet this morning. Her co-star then responded with a tongue-in-cheek comeback to Carol.

The BBC Breakfast star said that she was listening to Livin’ Da Vida Loca by Ricky Martin and the song got stuck in her head.

She went on to apologise to fellow BBC weather presenter Nick Miller for her singing while at work.

Carol penned: “Driving in this morning, I heard ‘Livin’ la vida loca’ on the radio…it is now totally stuck in my head. Sorry for the singing

Nick replied, with a short quip about “working next to a jukebox”.

He said: “If I wanted to work next to a jukebox…” followed by a red love heart.

@Johnofladublin responded to Nick’s reply with: “Sounds like you’re in for an experience quite like no other this morning Nick!

“Would you do requests Carol?”

Carol then responded with a series of laughing emojis.

The tweet and its responses were in full view of Carol’s 219,600 followers.

Other fans were quick to jump on to the tweet and offer their thoughts, too.

@Joursans wrote: “That’s not so bad.

“The other week I had the theme from the Muppet Show stuck in my head – so embarrassing!”

Similarly, @Kelbacon penned: “Morning! Nicer than the one I’ve had stuck in my head for DAYS.

@Pete_Yeates penned: “Good morning Carol it’s lovely to see on this morning just a shame that the weather not so nice for the weekend x.”

@Delroydr said: “No worries. As long as you don’t burst into song while giving the weather report you will be fine.”

@Stixago commented: “Give us a wee blast of it live on telly, when you’re telling us how blowy it’s gonnae be in Saltcoats at the weekend!!”

“Here’s a clue!” weather girl Carol said, showing off an image of herself holding a copy of her upcoming novel, The Hotel On The Riviera.

Carol is a Sunday Times bestselling author, but that didn’t stop Louise, who left BBC Breakfast last year, from giving her further encouragement.

“Whoop, whoop, how exciting!” she tweeted in reply.