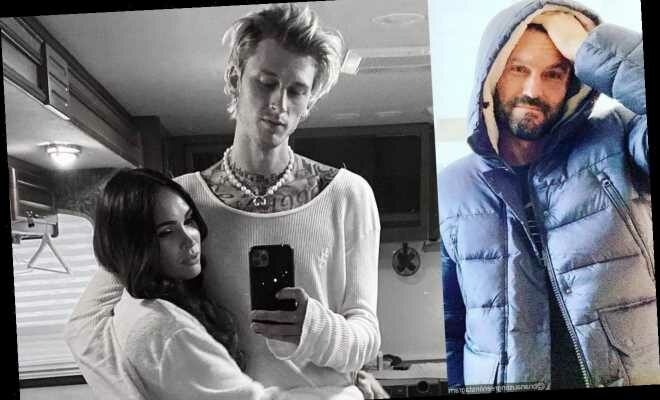 Meanwhile, the ‘Beverly Hills, 90210’ alum’s girlfriend Sharna Burgess admits in an interview that he and his ex-wife Megan are doing a ‘great job’ in co-parenting their three kids.

AceShowbiz –Brian Austin Green has nothing to say about Machine Gun Kelly‘s radical tribute to Megan Fox. A little over one week after the “Bad Things” rapper revealed that he is wearing a vial necklace containing the “Transformers” actress’ blood, the “Beverly Hills, 90210” alum plainly refused to make any comment about it.

The 47-year-old was pressed with the question when he was leaving a restaurant in Beverly Hills with his former co-stars, Jason Priestley and Ian Ziering. Asked about the bloody accessory as he entered his car, he simply told TooFab, “I don’t have thoughts.”

Green’s refusal came after Kelly showed off the unique neck chain when celebrating Valentine’s Day. Posting a close-up photo of it along with several snaps of him and his girlfriend, he wrote on Instagram, “i wear your blood around my neck.”

In related news, things seemed to be going strong between Green and his new lady love, Sharna Burgess. When making an appearance in the Friday, February 19 episode of Australian daytime program “The Morning Show”, the “Dancing with the Stars” pro praised her beau and his ex-wife for doing a “great job” co-parenting amid divorce.

“He’s a wonderful dad, and he and his wife – uh, ex-wife – have raised three beautiful children, and they are so wonderful and sweet and kind and considerate, and they’ve done such an amazing job,” she raved. “I think they’re doing a great job with managing their situation, so I’m grateful that I’ve been able to fit into it, into their world.”

Around two weeks earlier, Burgess was reported to have met Green’s kids, 8-year-old Noah, 6-year-old Bodhi and 4-year-old Journey. “[He] sees a lot of potential with [her] and is curious to see how things blossom further,” a source told E! News. “[She] has met [his] kids and they think she is super nice and get along swimmingly with her.”

The source continued, “[Green] loves how optimistic and positive [Burgess] is and how she is super driven and always smiling and laughing… He admires that she does her best to enjoy life and lead a successful professional life as well.” As for the Australian native, she was said to have been “super into [him] and is hoping that their relationship lasts.”

Burgess and Green sparked romance rumors in December 2020 when they were captured jetting off to Hawaii together on Christmas Day. Later on January 11, 2021, she went Instagram official with their romance.