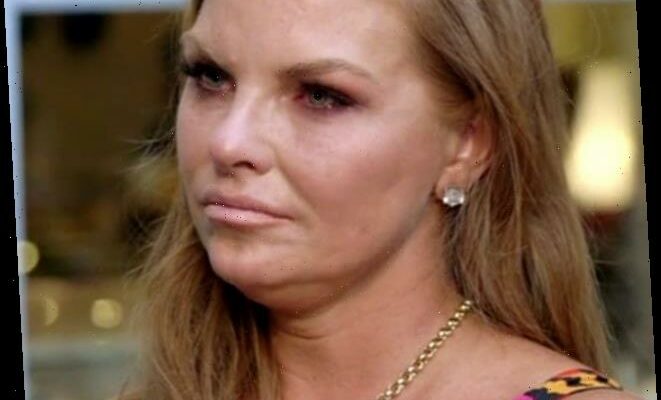 Earlier this year, Brandi Redmond appeared to announce that she was leaving reality TV.

The The Real Housewives of Dallas star may have been speaking of something else, however.

Her vague post is now believed to have been about her husband, Bryan.

Fans believe that he has cheated on her … and they have evidence.

A video has surfaced and made the rounds on social media.

In it, a man who strongly resembles Bryan Redmond appears to kiss another woman.

Bryan, of course, is the husband of Brandi Redmond, of The Real Housewives of Dallas.

In response, Brandi’s family is asking fans for privacy at this time.

They are not commenting publicly on the matter — at least, not yet.

That’s not a confirmation that the video shows Bryan cheating, but … a lot of fans are taking it as the next best thing.

Brandi and Bryan married in September 2003. Before that, they were high school sweethearts.

Together, they have four children, whose names we are absolutely not making up:

“Oh how time flies when you’re having fun and making memories with the one you love,” Brandi wrote.

“Happy 17 yr anniversary babe. I love you more than you’ll ever know,” she gushed.

“Go Cowboys!” Brandi added, referring to a sports team. “Of course they would have a game today.”

That was a sweet public tribute for an anniversary.

Brandi’s more recent posts, however, have had a different tone.

She referred to things coming to an end, causing panicking fans to wonder if she was leaving RHOD.

In light of more recent revelations, fans think that she may have been referring to her marriage.

That said … it could be both, right? I mean, look at this.

“I have loved sharing my life with you but sometimes things come to an end,” Brandi wrote.

“The best kind of ends are happy ending and I choose happiness,” she added. “Sending you all my love and prayers.”

For what it’s worth, though, a slew of reports followed that post and said that Brandi wasn’t leaving.

Sometimes, when people’s hearts are heavy with grief, they’re not thinking about how fans will read their posts.

If Brandi was writing about her husband cheating on her, she may not have been thinking about reality TV at all.

It’s also worth noting that there was a blind item last summer that said that a couple on the show was headed for divorce.

Looking at the piece, it appeared to be about Brandi and Bryan.

That makes this video that has leaked appear to be all of the confirmation that many fans need.

Brandi has clapped back against these kinds of accusations and rumors in the past.

But in 2019, when it was rumored that Bryan had secretly fathered their adopted child, there wasn’t a video to go with it.

In light of that … perhaps this is why all that she has chosen to say publicly is this cryptic message:

“Where God wants to lead you is always good,” the generic Christian message to her Instagram Stories reads.

That’s the sort of vague message that could be shared any day of the week.

But when it comes from a woman whose husband appears to be embroiled in a cheating scandal … it’s hard to see it being about anything else.