Sacha Baron Cohen mocked President Trump for losing the election by rescinding a job offer he made after Trump criticized his latest film “Borat 2.”

Fox News on Saturday projected Joe Biden to be the 46th president of the United States. The news was met with celebrations by the Democrat’s supporters in Hollywood, while prompting other celebrities to question the results of the election.

Among the stars speaking out to lambast Trump for being denied a second term in office was the “Borat” actor, who took to Twitter to deride the president's behavior over the past week as “tragic and sad.”

“Donald — you’re out of work and I know I offered you a job,” Cohen wrote Saturday shortly after the race officially broke in Biden’s favor. “But your performance this past week was tragic and sad. Offer rescinded.”

The barb was a direct follow-up to comments that the filmmaker made in late October after he released the sequel to his 2006 hit comedy on Amazon. The sequel saw the character from Kazakhstan embark on yet another tour of America, this time spending several days with conspiracy theorists, sneaking his way into the CPAC and having an actress pose as his daughter to prank Rudy Giuliani.

Voice of America White House bureau chief Steve Herman reported on Twitter that Trump commented on the wild movie, which took several shots at his administration and supporters. 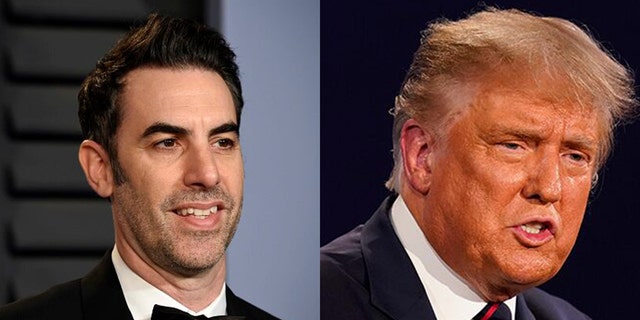 “I don’t know what happened. But years ago, you know, he tried to scam me and I was the only one who said no way. That’s a phony guy and I don’t find him funny,” Trump reportedly said on Air Force One over the weekend. “To me, he’s a creep.”

It didn’t take long before the celebrity took to Twitter with a jab of his own, thanking the president for giving his movie some free publicity.

“Donald — I appreciate the free publicity for Borat! I admit, I don’t find you funny either. But yet the whole world laughs at you,” he mocked. “I’m always looking for people to play racist buffoons, and you’ll need a job after Jan. 20. Let’s talk!”

As Variety notes, Trump was likely referring to a segment done on Cohen’s previous HBO comedy series “Da Ali G” show in 2003. As his famous Ali G character, he had Trump on and pitched him an outrageous business idea for a glove that prevents an ice cream cone from dripping on one’s hand. Trump walked out of the interview after it became clear that the pitch wasn’t legitimate.