Billie Eilish has stepped out with her brother Finneas while debuting her chin-length blonde locks. See the photos of her new ‘do!

Billie Eilish, 19, has a whole new look! The “Happier Than Ever” singer has stepped out with bowl cut-style bob in a stunning platinum blonde shade. She was leaving her Santa Monica music studio with brother Finneas on August 24, and looked incredibly chic as she debuted the chin-length style. Billie opted for a baggy tee shirt Rob Kardashian‘s Halfway Dead clothing line, along with cargo pants and plenty of layered necklaces and rings. 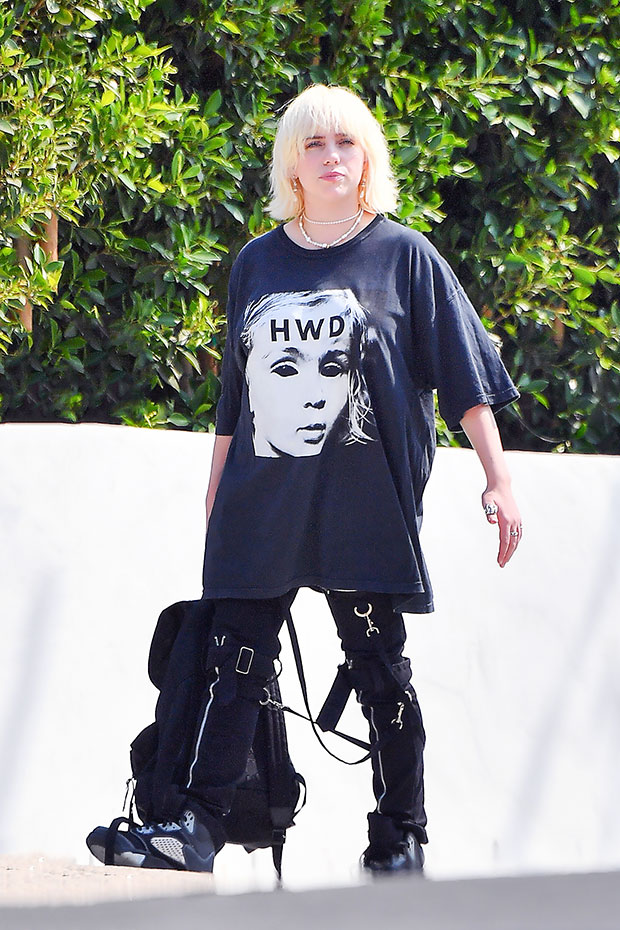 Her older brother, who is also her music producer, cut an equally cool figure in a pair of blue jeans a white tee with a neon pink print. It came a few days after Billie revealed her new hairstyle was inspired by her mom. She posted a throwback pic of her mother to social media, with the caption “like my mama” highlighting the similarities between the looks.

As fans would know, Billie has been rocking lighter locks this summer, but this is still a deviation from her go-to ‘do. Before her cut, she had shoulder-length blond hair with layers and front bangs. Now, her hair has an edgier look to it and is shaggier than her previous style. Regardless, thousands of fans jumped into the comments section on her Instagram page, noting how great she looked.

One fan commented, “WE LOVE IT,” while other comments read, “SHE LOOKS SO GOOD,” “She’s hotter than ever,” and “SHE LOOKS STUNNING.” This certainly isn’t the first time Billie has tried something new with her hair, so we’re not totally surprised. Back in May, Billie ditched her green hair for platinum blonde, totally shocking fans after rocking black hair with neon green roots for months.

Nevertheless, it seems the platinum blonde look is a part of her new “era.” Although she’s receiving plenty of love from fans since dropping her latest albums, even Billie isn’t immune to internet trolls. She recently clapped back at commentators who were calling her new album a flop. In a July 11 TikTok, Billie shared a line she had seen all over the social media platform – “Is it just me or is billie in her flop era? Why does she suck now?” – while she rolled her eyes. “Literally all I see on this app,” she captioned her video. “Eat my dust. My tits are bigger than yours.”