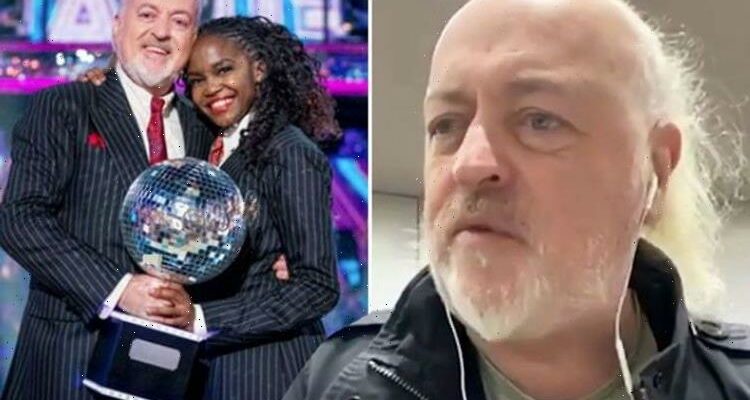 Bill Bailey became the oldest celebrity to take part on Strictly Come Dancing in the show’s first ever socially distanced series last year. The 56-year-old defined the odds and beat his competitors to the top spot with Oti Mabuse, 31.

Viewers witnessed the dancing duo lifting the Glitterball trophy as a mass of confetti fell from the ceiling.

Unlike other years, the couple only had each other to hug due to Covid-19 restrictions.

As part of the rules, each couple had to form their own bubble and were not allowed to mix with others.

In a new interview, the comedian said his win was yet to sink in a year on as he shared what happened to the trophy.

“We never really had a bit of a ‘waheeeey’… sort of, I don’t know what we would have done, danced in a fountain or something. You know, that seems to be the thing.

“But we didn’t do any of that because literally we went into lockdown about an hour after we did the live broadcast.”

Bill also said a member of the crew came up to him and asked for the trophy back just minutes after the show finished.

“A bloke came up to me from the production and asked for the trophy back,” he added.

“Because you don’t get to keep it, you just, you know, you can hold it, but you don’t keep it.”

Instead, winners are presented with a smaller version of the gong.

“He came over with a black bin bag. I’m not kidding. Literally, he went ‘Right, give me that!’

With this, he told Chris Moyles on Radio X that winning felt like an “anti-climax”.

Bill’s victory came as Oti’s consecutive win on the show.

Before getting her 2020 partner to the end, she won with Emmerdale star Kelvin Fletcher.

This year, seven dancing duos remain in the competition.

Those fighting for the Glitterball trophy include; AJ and Kai, Rose and Giovanni, Tilly and Nikita, Dan and Nadiya, John and Johannes, Rhys and Nancy and Tom and Amy.

Strictly Come Dancing continues at 6.35pm on BBC One.