AceShowbiz –Colton Underwood has to remind fans that he’s just like any other human being who has personal boundaries. “The Bachelor” star had to make an abrupt leave during a charity event for his Legacy Foundation at Mavericks Beach Club in San Diego on Wednesday, February 13 after being groped.

The former football player addressed his early exit to his Instagram followers, apologizing for what he did. “I’m sorry if you didn’t get a picture at the event last night, but at one point during the event I was grabbed and touched inappropriately while people were throwing cameras in my face,” he wrote on Instagram Stories, explaining that he would stay longer if his personal line wasn’t crossed.

“I am the type of person who would have stood in line for hours to make sure anyone who supported the event got a picture, but once that happened I had to what was best for me as a human being,” he continued, before reminding fans that he wasn’t a plaything. “I didn’t sign up to be a piece of meat or a zoo animal. I hope we run into each other at another event or on the street and I can take the time to say hello. Thank you again for coming to support Legacy and the fight against CF.” 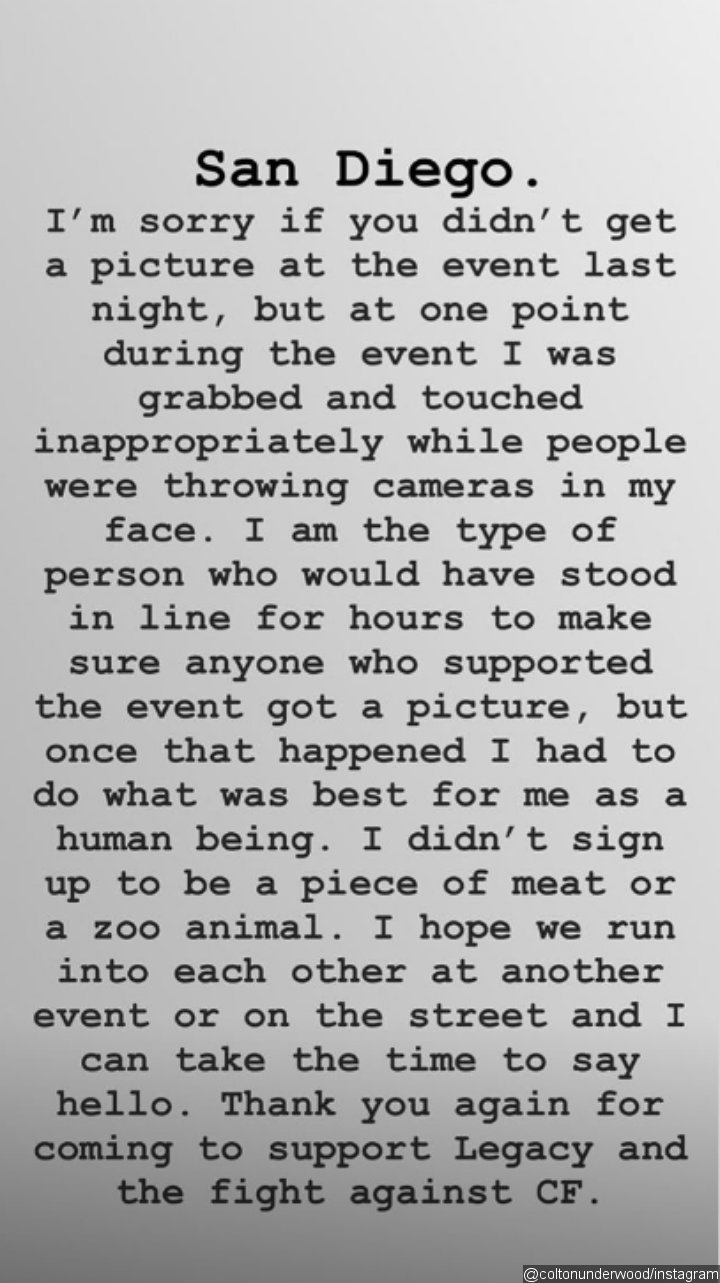 The person who grabbed him was not identified, but HollywoodLife.com noted that it wasn’t just one individual. “Colton was being physically groped by the women in the crowd so he stormed out of his event,” one attendee said. “While he was angry, he did his best to remain cheerful as he fled the scene. But it was clear that he was also annoyed and upset.”

The eyewitness added that before the groping incident happened, Colton was being chased around by girls throughout the night. Apparently, that frenzy was pretty much fueled by alcohol. “The bar was also passing out free drinks for girls dancing seductively for Colton. There were tons of rosed-up girls trying to tempt the ‘Bachelor’ and lure him in. It was a crazy scene,” the source continued explaining.