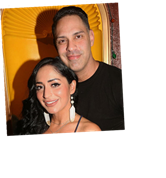 As loyal Jersey Shore fans know well, the wedding between Angelina Pivarnick and Chris Larangeira was viewed by the two people involved as a total failure.

Because Angelina’s co-stars/bridesmaids used their reception toast to roast the heck out of their alleged friend.

To this day, Pivarnick laments what transpired and has said she might redo the whole wedding.

However, Angelina may need to focus less on their wedding these days — and more on their actual marriage.

Because it may be fallen apart.

Heck, it may have already fallen apart.

This is merre speculation, we should note.

But it’s speculation that is now spreading like wildfire around the Internet… due to something Pivarnick just posted on Instagram.

“It’s only been 9 days into the new year and I’ve already learned a lot,” Angelina wrote as a caption to the photo above, adding:

I commit to making this year the best one yet.

Pivarnick did not provide any details beyond this message.

Is it still presumptuous to state this relationship is over? Yes.

But it’s not willdly presumptuous, based on all we’ve taken note of and detailed above.

One follower, for example, expressed her curiosity to Reddit, asking;

“Angelina and Chris getting divorced? They stopped following each other and her two recent posts are suggesting moving on.”

Others joined in on the sentinement, as one came right out and said:

“Lol I’m not surprised! Who would want to be married to someone who talks to them like they’re dog s**t.”

Pivarnick and Larangeira got married in November of 2019.

As mentioned previously — and as has been documented on episodes of Jersey Shore: Family Vacation — drama erupted at the event when Angelina’s three Jersey Shore stars made a speech that includes jokes at the bride’s expens.

Pivarnick was visibly peeved at the time and the crowd even booed.

She still hasn’t gotten over it, which has led some MTV viewers to grow sick and tired of her whining.

“Angelina and editing is the reason this show is getting boring,” one critic wrote on Reddit in late December, piling on at the time as follows:

“Every time Angelina is present there is drama which is unnecessary. I hate both production and Angelina equally.”

We’ve heard nothing about Angelina getting fired by producers.

But if there really are problems in her marriage?

And she really is let go by MTV?

Maybe she’ll finally have some free time to focus on romance to see if it can be saved.