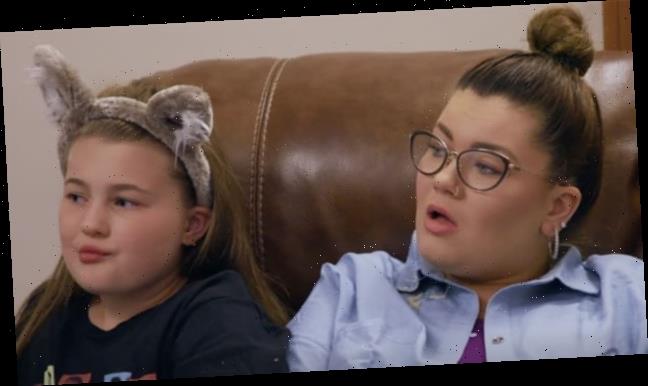 Amber Portwood is a woman with a past.

We’d like to say she’s put her wild ways behind her and shifted her focus to providing a stable and happy life for her two children, but sadly, that’s not the case.

Amber still loves to stir up drama, and she’s currently feuding with the fathers of both of her children.

But even though it seems that she has no intention of changing her ways, Amber is self-aware enough to realize that she’s now facing the same problem as so many of her Teen Mom colleagues:

After more than a decade in the spotlight, Amber is no longer 16 and pregnant — instead, she’s a 30-year-old mother of two who will soon be raising a teenager.

That means daughter 12-year-old Leah is at an age where she’s well aware that her upbringing has been very different from those of other kids.

And not surprisingly, the girl’s got questions.

Unfortunately, it sounds as though Amber’s not quite willing to answer them.

In a new interview with E! News, Portwood opened up about the difficult conversations she’s had with her tween daughter in recent months.

“She’s definitely coming at me,” Amber told the outlet.

“She definitely wants to know, ‘What the hell happened mom? Why this? Why that?'” Portwood continued.

“I say, ‘And you have every right and I’m going to give you your space. You let me know baby girl.'”

So … does Amber mutter some nonsense about giving Leah her space in order to avoid answering her questions?

If so, that’s pretty lame.

She’s gotta know that tactic won’t work for much longer, and this being 2021, and all, there’s a very good chance that Leah already knows all about her mom’s sketchy past and she just wants to hear Amber’s side of the story.

As you’re probably aware, Amber served 17 months in prison on assault and drug possession charges back in 2012 and 2013.

Unfortunately, it seems she didn’t learn much from that brush with the law.

Amber was arrested yet again in 2019 after she allegedly assaulted her then-fiance Andrew Glennon with a machete.

Glennon was holding the couple’s infant son at the time of the attack, but Amber was still able to avoid prison time by copping a plea deal.

It’s only natural that Leah would have questions about these rough patches in her mother’s life.

And it makes sense that Amber would want to avoid answering them — but she must realize that it’s better for Leah to hear it from her than from the internet.

In recent weeks, Amber has been attacking Gary Shirley on social media, which is somewhat surprising, as she previously seemed to have an okay co-parenting relationship with Leah’s father.

In her latest interview, Portwood refrained from slandering Shirley, but she did complain about the fact that she doesn’t get to see Leah as often as she likes.

“It’s hard because it’s hurtful to me when she feels possibly like she has more of a connection with somebody else than me because I’m not around as much as other people,” she continued.

“That sucks. I’m an hour way. It’s hurtful, it really is. But I’m happy to watch my daughter become this strong queen.”

Now, Amber could take steps to make sure that Leah enjoys the stable upbringing that her mother is unable to provide by holding off on  blasting the girl’s father and stepmother in public forums.

But that would mean thinking about someone else for a change, so you can be sure Amber will not be doing that.