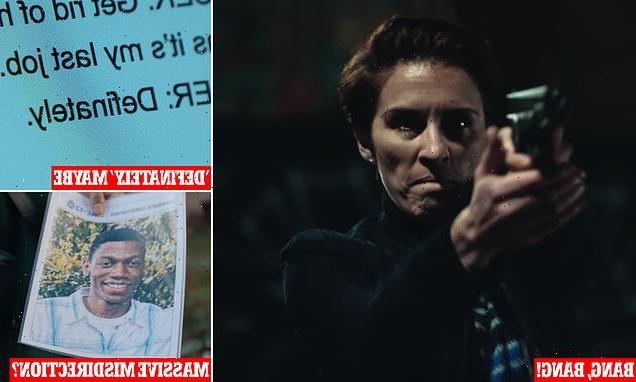 Line Of Duty has become infamous for storylines with more twists and thrills than a roller coaster, and this Sunday’s episode was arguably the most thrilling – and baffling – yet.

But none of that could compete with the cliffhanger.

DI Kate Fleming, tricked into meeting her boss, Acting Det Supt Joanne Davidson, in a deserted lorry park, ended up in an armed stand-off with corrupt PC Ryan Pilkington and shots rang out as the screen faded to black.

At the heart of Line Of Duty is the identity of ‘H’, suspected to be a senior police figure in the pay of an OCG (organised crime group).

And surely one of the latest plot twists will finally hold the key to the identity of this mysterious figure. 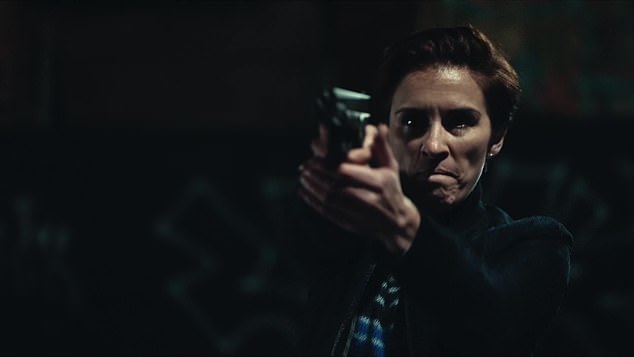 Actor Adrian Dunbar, who plays Supt Ted Hastings, head of anti-corruption unit AC-12, said yesterday: ‘A lot of Line Of Duty fans know what’s going on. All will be revealed in the fullness of time. There’s been a very big clue. There’s a clue out there as to what happens next.’

But what could that clue be? Mercurio has been candid about his enthusiasm for leads that go nowhere.

As the credits rolled at the end of episode five, two shots rang out.

A split second earlier DI Kate Fleming (Vicky McClure) had been face to face with juvenile thug turned police officer Ryan Pilkington, with guns pointed at each other.

What every Line Of Duty fan wants to know now is: Is Kate dead? Is Ryan no more? Or perhaps it’s Det Supt Jo Davidson (Kelly Macdonald) – who lured Kate to the deserted Menton Road lorry park and witnessed the stand-off – who has died? Did AC-12 arrive just in time?

On the surface, things don’t look good for Kate or Jo. The BBC synopsis for next Sunday’s episode says: ‘As AC-12 struggle to deal with the repercussions of tragic events…’ Surely Ryan’s death wouldn’t be considered tragic.

Meanwhile, actor Craig Parkinson, who played DI Matthew ‘Dot’ Cottan, also hinted that this was the end of Vicky McClure. 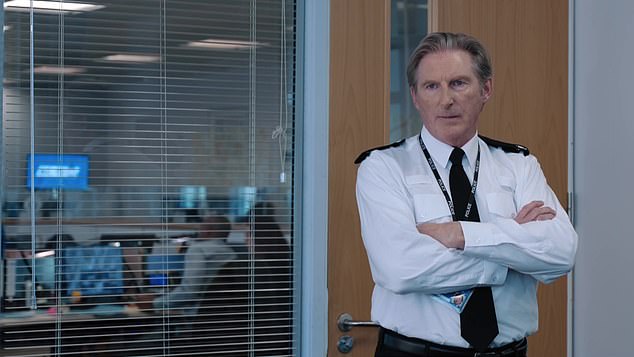 Actor Adrian Dunbar, who plays Supt Ted Hastings (pictured), head of anti-corruption unit AC-12, said yesterday: ‘A lot of Line Of Duty fans know what’s going on. All will be revealed in the fullness of time. There’s been a very big clue. There’s a clue out there as to what happens next

Recalling that his character was shot dead, he said: ‘Dot’s time came when it was time to serve the story and that’s what Jed will always do, so I don’t want to put anything out there, but Jed serves the story.’

And asked about whether Vicky McClure would return, Dunbar said: ‘It’s hard to tell. I wish I could tell you.’ All of which makes it sound very much as if she won’t.

However, a screen grab from a trailer for episode six appears to show the two women standing side by side, wearing the same clothes and in the lorry park, with Davidson raising her hands in the air.

Also, both women are on the cast list for the next episode. Although, with Mercurio’s talent for misdirection, this could mean nothing.

Red herring or red hot lead? Most likely a red herring – the shooting seems created to confuse. Probably the only thing proved at the lorry park is that Kate Fleming isn’t H, because the OCG wouldn’t try to kill her if she was.

On Sunday, Jo Davidson was seen continuing a conversation with an unidentified gang leader via an encrypted instant messaging app on her computer. This was identical to the one used previously by the OCG.

During the conversation she said that she was going to do one final thing for the OCG – hand over Kate Fleming to be killed.

The mystery criminal then wrote ‘definately’ – a misspelling that also turned up during an online conversation with OCG member Lisa McQueen in series five.

But the only person who has been seen getting this spelling wrong previously is… Ted Hastings himself, when he went online to impersonate an OCG member. So is the head of anti-corruption the rotten apple in the first place?

Actor Adrian Dunbar says not. In an interview earlier this month he said that the conclusion of the show was ‘a relief for me, as I spent all this time playing this character and I always thought Ted had a sense of duty and a moral core’. He adds: ‘To have found out I was this arch villain… I would have been in real difficulty accepting that.’ He went on: ‘Jed is aware of our audience and they know Ted has a sense of moral fortitude. 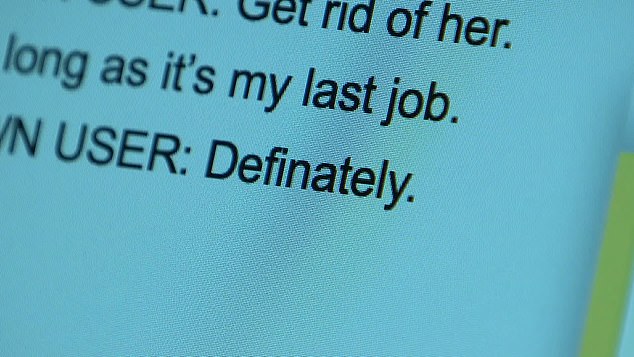 On Sunday, Jo Davidson was seen continuing a conversation with an unidentified gang leader via an encrypted instant messaging app on her computer

‘I am glad he came out of it with flying colours.’ So whoever misspells definitely, it’s definately unlikely to be Hastings.

Red herring or red hot lead? Probably a red herring – Mercurio loves to play to the gallery, and knows that the ‘definately’ clue was picked up by fans previously.

JOANNE Davidson’s DNA was last week’s cliffhanger, and we now know that the person she has links to is OCG boss Tommy Hunter.

As DI Steve Arnott announces: ‘Davidson’s DNA is a partial match for Tommy Hunter, but that’s not the worst of it.

‘There’s an unusually high percentage match for runs of homozygosity.’

While it’s not explicitly explained in the show, a ‘run of homozygosity’ is a genetic sign that can be read as an indicator for incest.

Eagle-eyed viewers will have spotted a note stuck to a computer screen making the matter clearer yet, stating: ‘A match has been made to TOMMY HUNTER, stating she is both his niece and daughter.’

Hunter was ambushed in series two and later killed in hospital. But this DNA evidence still doesn’t explain exactly why Jo Davidson is working with the OCG, who appears conflicted by her situation. It’s also still unclear what this clue has to do with Tommy’s son Darren Hunter, a thug who assaulted Lawrence Christopher in 2003.

Red herring or red hot lead? Red herring: Another fascinating storyline, but again seems unlikely to point to the identity of H.

Up to now, the focus has been on Operation Lighthouse – the murder of journalist Gail Vella. She had been investigating the paedophile ring that preyed on the Sands View boys home. 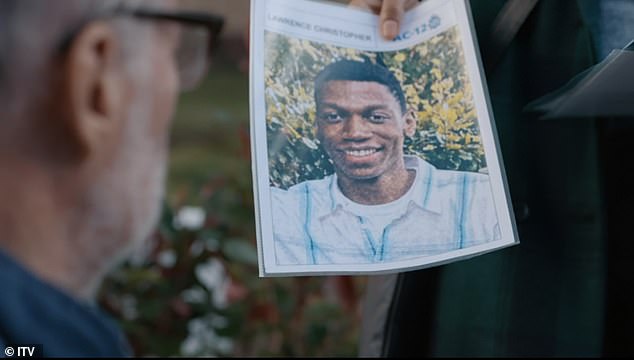 But on Sunday, Steve Arnott (DI in AC-12) said that he had been told by corrupt lawyer Jimmy Lakewell – just before he was killed in prison by the OCG earlier in series six – that Vella was actually looking into the murder 20 years ago of black teenager Lawrence Christopher

The home and its links with the police and organised crime had previously been the focus of series three.

But on Sunday, Steve Arnott (DI in AC-12) said that he had been told by corrupt lawyer Jimmy Lakewell – just before he was killed in prison by the OCG earlier in series six – that Vella was actually looking into the murder 20 years ago of black teenager Lawrence Christopher.

Christopher died in police custody after being hit in the head by a lead pipe during a gang attack, and was mocked and racially abused by police instead of being treated for a skull fracture.

It emerges that Chief Constable Philip Osborne was involved in the Christopher cover-up. He’s also the one-time boss of Steve Arnott. Had he been pulling the strings behind the scenes to stop Gail Vella from exposing police incompetence or corruption?

Another high profile suspect for H is Police and Crime Commissioner Rohan Sindwhani who urges Ted Hastings to fight with whatever time he has left before AC-12 is disbanded. But he was interviewed by Gail Vella, and in an unbroadcast interview she accused him of colluding in a cover-up. 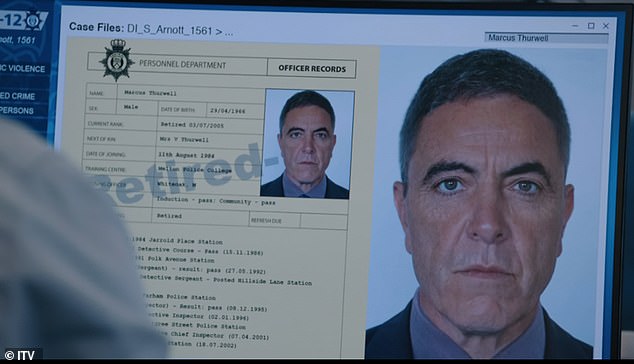 Sindwhani has already been proved to be a liar, fibbing about the outcome of Operation Pear Tree which uncovered ‘no institutional links’ between the police and organised crime. Additionally, his right-hand woman used to be legal adviser Gill Biggeloe – found to have been corrupt in series five.

Many are also suspicious of DCC Andrea Wise, who is disbanding AC-12 and warns Ted: ‘Don’t waste your last roll of the dice chasing a phantom.’

Probably a red herring: You could argue all of them would want Gail Vella dead, and Ted out of the way – but there would need to be a lot of explaining in the next two episodes.

RIDDLE OF THE RETURNING CARMICHAEL

Now she’s back to take over AC-12 – put in place by DCC Andrea Wise.

Played with icy aplomb by Anna Maxwell Martin, pictured, she announced to the room on Sunday: ‘For those of you for whatever inexplicable reason don’t know, I’m Patricia Carmichael.’

She then cancelled surveillance on witness Terry Boyle and cops Ryan Pilkington and Jo Davidson – enabling the attempt on Kate Fleming’s life.

Red hot lead: It’s distinctly possible that she holds the key. Some even say that her name is a clue, with Jimmy Lakewell telling Steve Arnott to ‘look into the race claim’ – ‘race claim’ is an anagram of Carmichael, minus H.