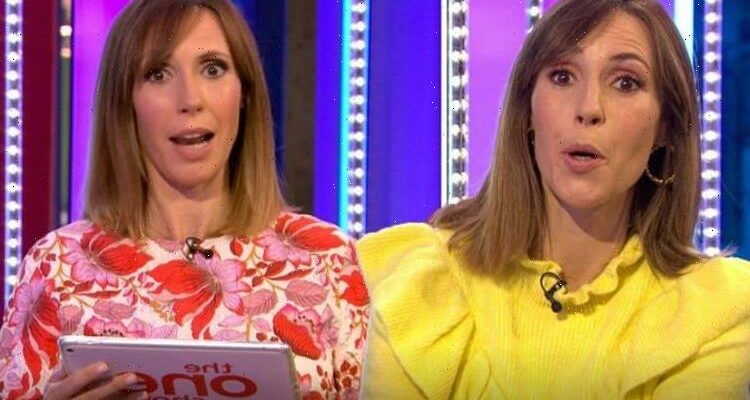 Strictly: Alex Jones and Jermaine Jenas joke about signing up

BBC host Alex Jones, 44, has taken to social media to reveal that she was experiencing a minor form of contractions this evening as she presented The One Show from the famous green sofa. Taking to Instagram, a heavily pregnant Alex revealed that she felt Braxton Hicks contractions while hosting the half-hour long show, before thanking co-presenter Ronan Keating for “looking after her” following the scare.

Donning a floral red and pink mini dress, the star posed for a quick snap in her dressing room backstage after the show had ended.

Showing off her toned legs, the Welsh native wore a pair of sky-high red heels as she relayed the news to her fans.

In view of her 300,000 followers, Alex thanked The One Show crew and her colleague Ronan Keating for taking good care of her.

She wrote: “Was having a bad case of the old braxton hicks during the show so thanks @rokeating and the crew for looking after me.”

The NHS website cites Braxton Hicks contractions as tightening of the womb as it contracts and relaxes.

They tend to occur towards the end of a pregnancy and the NHS said they are “usually painless.”

Despite Alex’s admission, the BBC star presented the show as if nothing had happened and was her usual bubbly self.

In March, the star announced that she is expecting her third child with husband Charlie Thomson.

Speaking to co-host and singer Ronan on the BBC show, the Welsh host made the announcement live on TV.

Shifting in her seat, Alex said: “I feel really nervous all of a sudden.

“It just feels like a good time to share some news with everybody and the crew in the studio for the first time.”

She continued: “Lockdown’s been anything but predictable and we’ve had some really unexpected news, baby number three is on the way.”

As well as announcing the news on TV, Alex took to Instagram where she announced her pregnancy in a sweet black and white snap.

The presenter captioned the photo: “The best surprise ever. “

The picture featured her with two sons, and husband Charlie holding up a board that said “Baby number three on the way.”

Days ago the star hinted that her One Show colleague Jermaine Jenas could join the Strictly line-up this year as they spoke to Craig Revel Horwood.

Speaking to the judge, Alex said, while pointing across the sofa: “If you’re looking for contestants though…”

“You would be fantastic,” Craig exclaimed, with Alex adding: “It’s just an idea. A suggestion.”

Jermain hit back saying: “You can’t keep putting me out here like this. This is getting ridiculous honestly.”