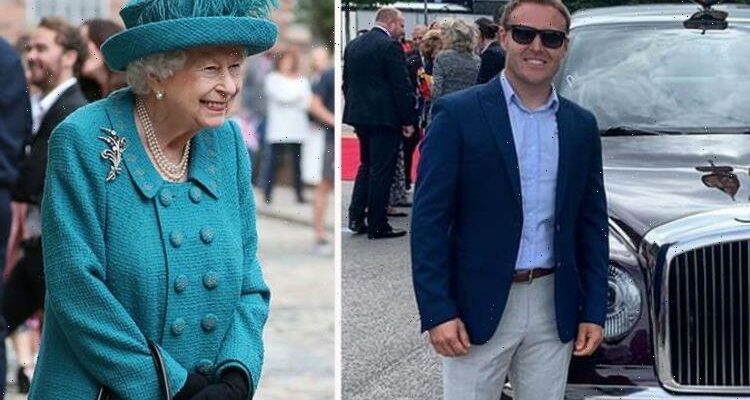 Coronation Street star Alan Halsall took to social media last night following an “incredible” day on set. The 38-year-old actor, who has been in the long-running ITV soap opera for 23 years, posted a string of pictures and videos on Instagram after meeting the Queen, 95.

One of the images showed Alan, who plays a car mechanic on the show, posing with the Queen’s car.

“Slightly different to the cars I am used to seeing on the cobbles!!” he amusingly captioned the snap, which he shared with his 218,000 followers.

“Gave it a full service & MOT.

“full service! You after an OBE,” one of Alan’s followers joked.

“Did you check the tyres,” a second user chipped in.

“Hope the owner gave you a good tip,” a third added.

“Great day today mate. What a place to call home,” Colson Smith, who plays Craig Tinker in the soap, wrote beside the photo.

Another picture captured the well-dressed star talking to the royal.

“Today was incredible …. I met Her Majesty The Queen!!” He gushed.

“I am so honoured to be a part of Coronation Street and today the show has given me yet another memory I will treasure for the rest of my life.

“It was an absolute privilege to be in Her Majesty The Queen’s company and have a conversation with such a wonderful woman,” Alan wrote alongside the image.

“Wish i was with you!” wrote Alan’s girlfriend, former Corrie star Tisha Merry.

Jack P Shepherd, who plays David Platt in Corrie, also took to the picture-sharing site to mark the occasion.

“What a time to be alive. I’ve met the queen! Not everyday you can say that,” he wrote online.

Her Majesty visited the set of Coronation Street yesterday to mark the programme’s 60th anniversary, which was celebrated in lockdown last year.

She previously walked down the cobbles in 1982.