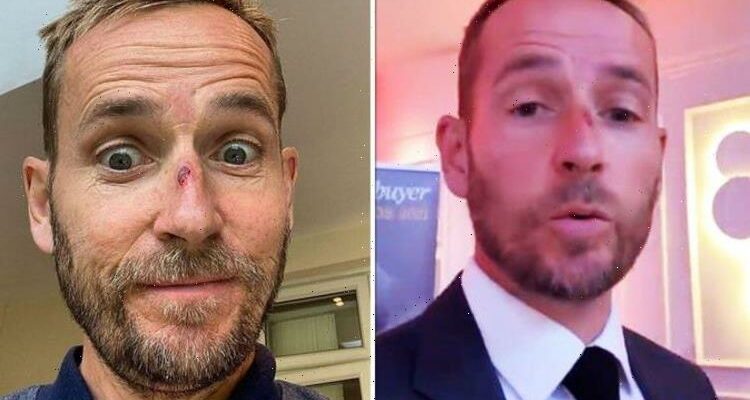 A Place In The Sun presenter Jonnie Irwin, 47, has taken to Instagram to reveal how he suffered a nasty injury to his nose, as he prepared to attend the First Time Buyers Readers Awards today. The star posted a selfie sporting a painful-looking cut in the middle of his face, before explaining that he had a “big day” ahead of him.

Perfect timing then for a DIY mishap to the schnozza!

In view of his 27,000 followers, the property guru claimed he could not have sustained the facial injury at a worse time.

He wrote: “Big day work-wise coming up on Friday for the @firsttimebuyermag Readers Awards involving lots of photos.

Perfect timing then for a DIY mishap to the schnozza!”(sic)

He posted another shot of himself, sharing the full extent of the deep gash.

Taking to his stories again today, Jonnie told his followers what his afternoon involved.

“Here I am at the amazing venue,” Jonnie added while panning a room which had been lit atmospherically.

“My partner in crime, the glorious Nicki Chappers [Chapman], look at that – unbelievable,” he gushed, as his co-host entered the frame.

Jonnie continued: “We’ve got a wonderful band who have just been warming up, I can’t wait to hear them

“And we’ve got hundreds of people, nominees, highly commended, and winners that we’re going to be announcing later today.”

The star went on to address his injury, which could still be seen even in the dark room.

He added: “And my nose isn’t too bad.

“So, onward to the festivities,” Jonnie signed off.

Following his candid admission, his followers flocked to the comments to express their shock at his injury.

Another commented: “Oh no. I bet that made your eyes water.”

“Never mind you, how are the twins now?” one Instagram user asked.

Four days ago the TV personality told how his youngest children had woken up in the night and had been “projectile vomiting everywhere”. But confirmed in the upload that they were now much better.