Jamie Alamillo, 48, was told by doctors that he’d never walk again, let alone ride a bike, after he was diagnosed with blood cancer in 2013. Despite those dire predictions, he finished a 540-mile ride earlier this month to raise money for the Leukemia & Lymphoma Society.

It started with extreme back pain in the fall of 2013. Then one night in November, he suddenly lost all feeling in both legs. After his wife rushed him to the ER, he spent six hours in surgery.

Alamillo was diagnosed with stage 3 multiple myeloma, which is a kind of blood cancer that infiltrates bone marrow and causes weakening of the bones. During his operation, doctors discovered that he had spinal cord compression and two lesions on his back, where the cancer had eaten away at the bones, causing vertebrae T4 and T7 to break.

After the operation, doctors told Alamillo that he’d probably never walk again. When his toe moved, they said it was just a reflex. But when his knee moved a few days later, he knew there was still hope.

He started walking with assistance a few months later.

Alamillo credits his wife and two children as being a big part of his motivation to get better. He knew how hard it would be for his wife to take care of two young children on her own. And so, as his daughter was learning to take her first steps, Alamillo found himself relearning how to walk, too.

Then on July 21, 2014, Alamillo received a stem cell transplant that put him into remission. To him, it felt like a “new birthday.”

To celebrate his good news, Alamillo participated in America’s Most Beautiful Bike Ride, organized by Bike the West for Team in Training and the Leukemia & Lymphoma Society, for the first time in 2015. He didn’t remember being cleared to ride a bike yet when he took part in the 100-mile fundraiser ride in Lake Tahoe, but he knew he could do it—and has continued to do so each year since.

Giving Back on the Bike

It was not just about getting back on the bike for Alamillo. It was about giving back, too—the money raised on the ride goes toward funding cancer research. With every $100,000 raised, you can select a specific research portfolio to contribute to, so that the money can go towards research for a specific cancer.

So far, Alamillo and his team, Tour 2 Cure, have contributed towards two portfolios, one for multiple myeloma and one for cancer immunotherapy. 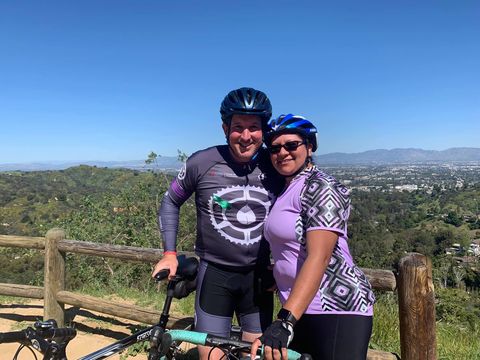 This year, Alamillo wanted to do something different. Along with completing the standard 100 miles for the charity ride, Alamillo decided he wanted to get to the starting point by bike. This meant he would have to ride 440 miles from his home in Santa Clarita, California, to Lake Tahoe, Nevada.

To prepare for his 540-mile ride, Alamillo visited his local bike shop, InCycle, and picked out a new Specialized Roubaix. The shop owner gave him advice on what to wear—much needed, as it turned out—especially on thermal gear, as his ride through the Sierra Nevada mountains proved colder than he had originally anticipated.

He set out on May 23, 10 days before the start of the charity ride. His father-in-law accompanied him in a car the whole way, to ensure his safety and to provide support.

“He was bored as hell, but he stuck with me,” Alamillo said.

Alamillo reached Lake Tahoe on May 31, with enough time to recover before the 100-mile ride on June 2. As he approached town, friends and teammates rode alongside him at various points. Others lined the road to cheer him on. 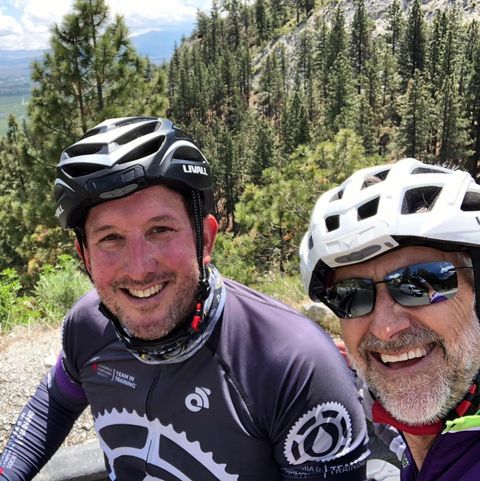 [Find 52 weeks of tips and motivation, with space to fill in your mileage and favorite routes, with the Bicycling Training Journal.]

While the effort of doing a 540-mile ride was monumental, especially while still living with an incurable disease, Alamillo says that he always feels better on the bike.

“I still have spinal cord compression, which is uncomfortable, and some neuropathy,” he said. “But once I’m on my bike, it just goes away.”

Though he’s in remission, Alamillo still gets treated with a Zometa infusion every three months to harden his bones and protect him against further breaks. He also takes a chemo pill once a month, which causes the neuropathy.

Since going into remission, Alamillo has participated in 11 half marathons, three marathons, one triathlon, and an Ironman-distance duathlon, in addition to the charity rides. 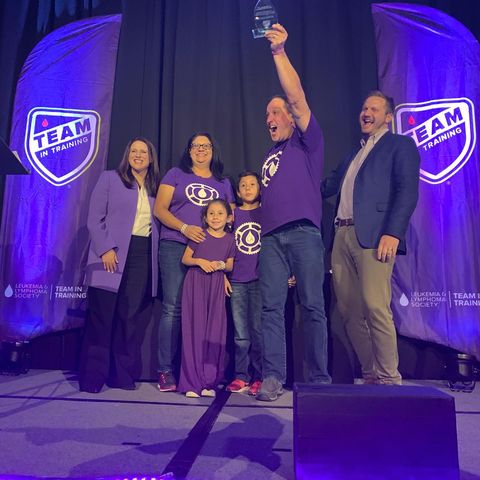 Alamillo was invited to participate in another charity ride this year, as well—one organized by the Multiple Myeloma Research Foundation. The ride will take place from September 17 to 22, starting in Stowe, Vermont, and ending in Quebec. It’ll be his first time needing to take his passport with him on a bike ride.

He’ll continue to do America’s Most Beautiful Bike Ride every year, too, of course. He’s already planning the ride for next year and hoping to repeat what he did this year, preferably with some of his teammates joining him for the entire 540 miles.

Over the past two years, his fundraising team has raised almost half a million dollars for cancer research.

“I want to get to a million,” Alamillo said. “I’ve already started a team for next year.”